Puppy farm sting: Strawberry the boxer left to rot while her puppies were sold to Claremont pet shop

A pet shop selling designer puppies in one of Perth’s most prestigious suburbs has been linked to a puppy farm in New South Wales that last week was raided by the RSPCA for the second time in five years.

An undercover investigation by animal rights group Oscar's Law uncovered the link between an Inverell puppy farm in northern NSW and Claremont Puppies and Pets. 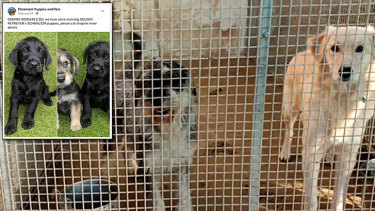 Bare cells, with no bedding, where dogs are kept imprisoned 24/7 according to a whistleblower. The schnauzer-cross and golden retriever pictured are believed to be responsible for the puppies sold at Claremont Puppies and Pet.Credit:Oscar’s Law

Claremont Puppies and Pets sells puppies, all of which are are well taken care of, for thousands of dollars.

The shop’s owner does not deny sourcing his dogs from that particular breeder but said he did not know of any poor conditions and did not believe the dogs there were treated badly.

In 2015, the NSW property was raided by the RSPCA, which handed the investigation over to the local council, which then brought hundreds of charges for farming with 300 unlicensed breeding dogs in what were described as appalling conditions.

The matter with the council was later settled out of court, with no conviction recorded against the breeder, who was able to continue licensed operations with 180 breeding bitches, 25 sires and 195 progeny at any one time.

Puppy farming in NSW is not illegal and the state has among the least-enforced regulations in Australia, beyond requiring council permits, according to Oscar’s Law.

But the conditions at the farm remain problematic, with an ex-worker, who has had their name changed to Anna to protect their identity, blowing the whistle to WAtoday that there were at least 300 dogs still being kept across multiple properties.

Two properties were raided by the RSPCA on Wednesday over “allegations of animal cruelty and noncompliance of state breeding Codes of Practice”. No charges have been laid.

Anna said conditions on the Inverell farm were not healthy and the bitches and sires were kept in bare concrete and sometimes overcrowded wire pens.

She said the pens and the animals were often covered in faeces because the dogs would only be let out for less than 20 minutes, once a day, to eat and exercise while the pens got washed.

“They don’t get cleaned properly, it’s basically just water in the big runs – I wouldn’t let my dog sleep in it,” Anna said.

She said some of the dogs grew skinny because they didn’t get fed individually, instead having to compete with other dogs feeding from the same bowls.

Working at the farm became unbearable, Anna said, after a boxer named Strawberry died earlier this year after being made to breed under the age of one.

She said Strawberry only managed to birth three pups in February, when she fell ill because there were other puppies left rotting inside her.

“It was a very horrible thing to see, she was covered in flies, the first time I had seen her, and the smell of her was like death,” Anna said. 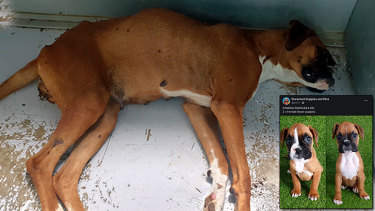 Distressing imagery: Strawberry in her dying minutes, and her puppies being sold in April at Claremont Puppies and Pets.Credit:Oscar’s Law

“[The owner] had gone into the pen [Strawberry] was in and nudged her with his foot while saying, ‘Are you dead yet?’, and was laughing about it.”

Anna said Strawberry had been earlier bathed by another worker who found parts of the dead puppies, together with maggots, in her vagina and mouth.

“She was basically rotting from the inside out and that would be why she smelt of death,” Anna said.

“And not once did [the owner] show any enthusiasm of taking Strawberry to the vet to have a caesarean or to get the medical treatment she needed.”

From Inverell to Claremont

Paperwork from the business, obtained exclusively by WAtoday, shows notes listing the sale of cross-breed pups from a dozen female dogs kept at the NSW farm to a“Claremont pet store Perth WA” from October 31, 2018, until January 16, 2019.

There is no suggestion the pet shop owner was aware of Strawberry’s condition when they agreed to purchase the puppies. 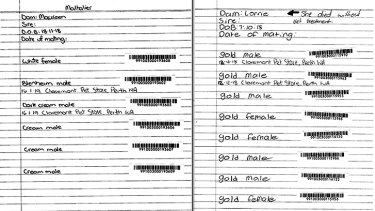 Photographs of the Flanagan’s paperwork, obtained by WAtoday, shows the sale of puppies to a “Claremont pet shop”.

During that time, Claremont Puppies and Pets was the only puppy seller in the suburb.

When approached about the poor conditions at the farm, owner Victor Finkelstein did not deny getting his puppies from the Inverell farm and said that he had been to their property regularly.

“I have never seen a dog in bad conditions,” he said. “I know they look after their dogs and puppies, I have seen them.

When told the story of Strawberry, he agreed that it was cruel; “if it has happened”.

“I got some boxer puppies but I don’t know about the mum; it sounds like a load of crap,” he said. 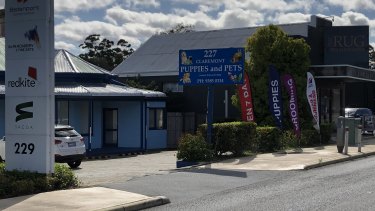 This pet shop in Claremont has sold puppies that were bred on a puppy farm in NSW, which has been raided by the RSPCA.Credit:Aja Styles

He said he didn’t keep records of his dogs’ parents’ names, he just got photographs of them because that was all that buyers were interested in and he had no reason to keep those kinds of records.

Mr Finkelstein, who hadn’t been to the farm in 18 months, said he was aware of the recent RSPCA raid but again denied that his breeder would be classed a puppy farm, instead believing that the animal activists had brought on the raid to get legislation passed through WA Parliament.

“These people are extremists that will try anything to close them down,” he said.

The WA Parliament is currently considering the proposed Dog Amendment (Stop Puppy Farming) Act 2020 that would require detailed breeding records to be kept and force pet shops to stop puppy sales and move to an adoption model.

Mr Finkelstein said the legislation would put him out of business and there would be no puppies available in the state, which would drive up backyard breeding.

Some of the Inverell pups were also sold directly to private buyers across Australia, including in the Perth suburbs of Mindarie and Leeming, as well as Pilbara town of Karratha.

Oscar’s Law president Georgie Purcell said the Inverell puppies were flown across the country to be sold to unwitting customers.

“While the puppies get to leave, their parents never do”, she said.

Parliament has yet to debate the Stop Puppy Farming Act in the upper house. 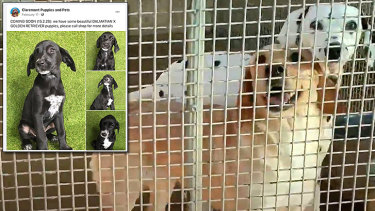 The dalmatian and golden retriever held at a NSW puppy farm believed to be responsible for the pups sold at Claremont Puppies and Pets.Credit:Oscar’s Law