Sheffield City Council is blasted by watchdog for its ‘dishonesty’ after publishing plans to fell thousands of trees at 04:30am… half an hour before workers started chopping them down

A council who published documents over its tree felling programme in the middle of the night to ‘avoid scrutiny’ has apologised for its ‘lack of… honesty’.

Sheffield City Council was forced to issue a public apology after a report found it acted with a ‘lack of transparency, openness and, on occasion, honesty’ in the way it removed street trees in Sheffield.

But campaigners say their ‘mealy-mouthed statement’ does not go far enough to remedy the underhanded way they dealt with the felling of trees around the city.

The council has been involved in a long-running controversy over the felling programme.

As part of the £2.2bn, 25-year street improvement works thousands of trees addessed as dangerous, dead, diseased or dying were removed by Amey contractors.

Their removal provoked scenes involving protesters, van-loads of police and arrests in some of the city’s leafiest middle-class suburbs. 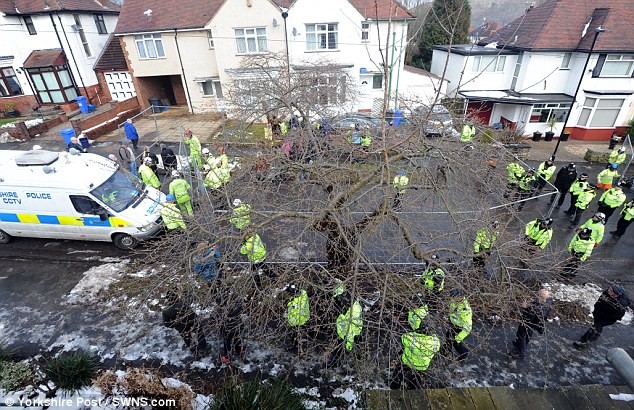 Sheffield City Council has issued an apology after a report found it acted with a ‘lack of transparency, openness and, on occasion, honesty’ in the way it removed street trees. Pictured: Tree protesters and police clash on Abbeydale Park Rise in Sheffield 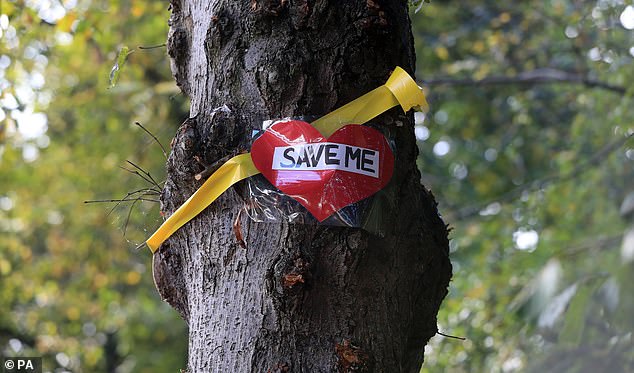 The council has now said that it ‘got some things wrong’ after an ombudsman report found that it published documents in the middle of the night in the hope of ‘avoiding scrutiny’.

The watchdog also found the council drew a ‘veil of secrecy’ over expert advice, and resorted to ‘subterfuge’ in posting false tree removal notices.

A council response to recommendations from a specialist panel established to resolve the ongoing disagreements was published at 04:30 on the day it scheduled contractors to remove trees.

At least eight trees were felled within hours, despite the Independent Tree Panel (ITP) saying only one needed removing.

The Local Government and Social Care Ombudsman report said: ‘We see a recurring pattern, therefore, of the council failing to be open and transparent in decisions taken under its Streets Ahead policy.’

It added: ‘Transparency goes to the heart of trust in decision-making. It is at the heart of good administration. 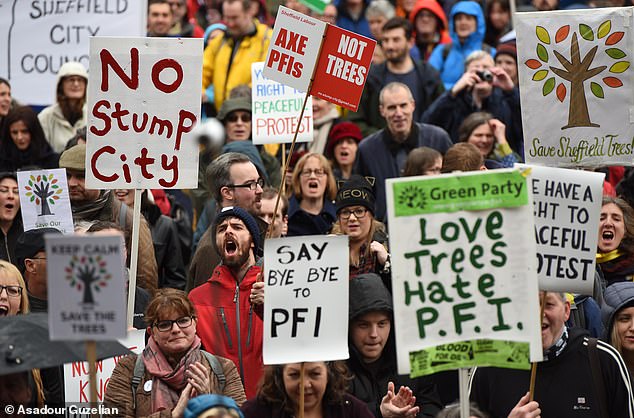 The removal of trees in Sheffield provoked scenes involving protesters, van-loads of police and arrests in some of the city’s leafiest middle-class suburbs (Pictured: A protest against their removal in April 2018) 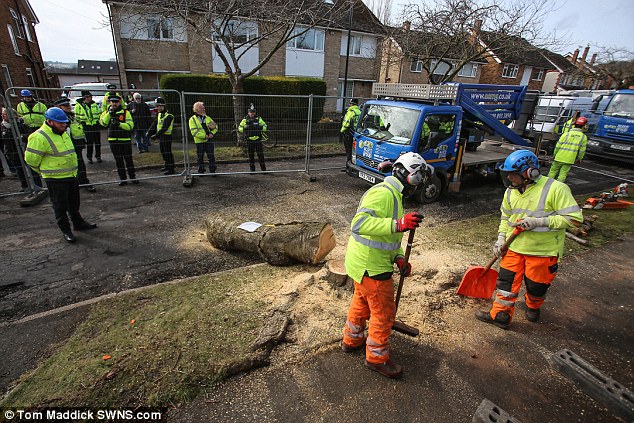 The watchdog found the council drew a ‘veil of secrecy’ over expert advice. Documents about the tree felling was published on the council’s website at 4:30am on the day it scheduled contractors to remove trees

‘We consider one of the root causes of the significant loss of trust the council suffered in carrying out its Streets Ahead policy…lies in its lack of transparency, openness and on occasion, honesty.’

In a statement on the council’s website, Councillor Mark Jones, cabinet member for environment, street scene and climate change, said: ‘We fully accept the findings of this report and recognise that our approach to managing the city’s street trees needed to change.

‘We got some things wrong and, whilst this report is reflective of a very different and difficult time, we are continuing to make real and significant progress towards a more transparent and collaborative future when it comes to managing our valuable street tree stock.’ 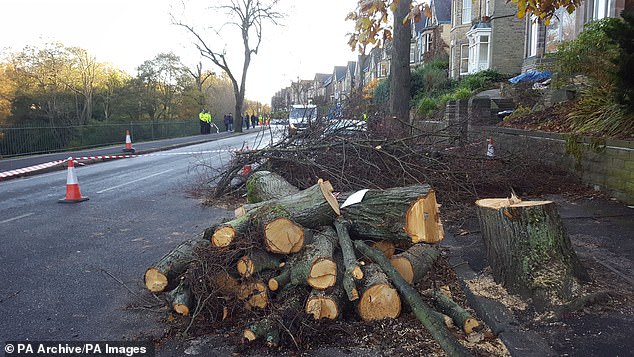 Trees trunks and branches lie on the ground in Rustlings Road, Sheffield, after they were felled during the controversial programme

How the controversial saga unfolded

This is how it unfolded.

2012: The £2.2 billion ‘Streets Ahead’ contract was signed to improve pavements and street lighting. It included the management of Sheffield’s highway trees.

2014: Felling notices began to appear on trees, some of which were more than 100 years old.

2015: Campaign groups were set up to protect the trees on various streets.

November 2015: The Independent Tree Panel (ITP) is established as a specialist group to resolve ongoing disagreements.

December 2015: By the end of the year, campaigners claim more than 3,000 trees had been felled across the city.

February 2016: Sheffield residents apply to the High Court seeking a Judicial Review, resulting in an interim injunction which halted felling from February to April 2016.

June 2016: When felling resumed, police became involved as protesters clash with workmen. Other protestors are arrested as protests carry on throughout the year.

November 2016: The council publish ITP’s recommendation to save seven of threatened treesat 4.30am, hours before contractors tear down eight.

December 2016: By the end of the year, campaigners claim more than 5,000 trees had been felled across the city.

2018: Freedom of Information data shows Council planned to chop down nearly half of the 36,000 trees along the city’s streets.

The ombudsman launched the investigation after a man complained about the removal of eight trees on his street in November 2016.

The report says it found numerous examples where the council was not open and clear about its policies and procedures.

It also found a lack of information about why certain trees were identified for removal and that the council created a ‘veil of secrecy’ over its consideration of advice from the Independent Tree Panel (ITP) that it did not need to remove certain trees.

The council did not release this information into the public domain.

The secrecy extended to the publication of a five-year tree strategy that listed solutions to retain trees that were not part of its policy or contract and therefore would never have been used, the watchdog found.

It said the council published documents in the middle of the night ‘in the hope of deliberately avoiding scrutiny’ and described the removal of trees at 5am as a ‘disproportionate response’ that could cause distress and outrage to residents.

The report also said there was a suggestion that the council ‘resorted to subterfuge’ in putting up false notices of tree removals elsewhere on the day it removed trees from the complainant’s road.

The write up also noted that South Yorkshire Police had rejected the council’s claim that it only removed trees in the way it did based on police advice.

The ombudsman said it welcomed steps already taken by the council to improve how it consults and makes decisions around street tree removals, which the council said included the creation of a partnership group and the recent production of a new Street Tree Partnership Working Strategy for Sheffield, and made a number of further recommendations.

The council confirmed it would also apologise to the family of the complainant, who has since died.

‘The mealy-mouthed statement published on the council’s website today is not an apology.

‘There have now been two damning rulings by the Local Government Ombudsman.

‘It is very clear that an inquiry is needed into what happened, and Sheffield City Council must learn lessons rather than expecting us to move on without evidence that anything will change in the future.’