Home » World News » Why must Australia’s COVID strategy be so cruel?

Why must Australia’s COVID strategy be so cruel?

As the tears flowed again all I could do was ask why? Why, when I had dedicated so much of life to the country I love to call home, was I was being treated like a prisoner simply for the "crime" of being born overseas with immediate family in a different country? 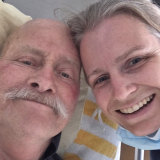 Astrid Magenau with her father Horst Magenau, 76, on an earlier trip back to Germany.

I am a 42-year-old medical research scientist and the Australian hotel quarantine system caused my distress. Several weeks ago, I became one of the first Australian residents to speak out about the emotional harm and suffering that the ban on leaving the country was causing. But worse was to come.

I was born in Germany and came to Australia in 2005 to complete my PhD. It was heartbreaking to say goodbye to my family and my friends but at the same time I was excited and full of joy – I had dreamed about Australia since I was a child.

I met my Australian husband and five years ago our son, Hendrix, was born. I was happy he would hold dual citizenship and would have two countries he could call home.

This year I was granted Australian citizenship. Then coronavirus hit. And my father died.

I was unable to keep my promise to be by his side when he died because I wasn’t able to leave the country. Instead, his last seconds of life were spent with me via video chat.

It was as traumatic as it was unnecessary, allowing me to return to the country of my birth to hold his hand as he left this world would not have posed a health risk to Australia given I would have to enter quarantine upon return.

After seeking help from the German consulate-general and my federal MP, Paul Fletcher, I was granted an exemption to fly out so I could bury my father.

But even after the funeral my ordeal was not over. As the government's caps on arrivals began to play havoc with airline scheduling, my flight home, booked for September 20, disappeared. At 5am the day before, I received a call from Qatar Airways to inform me that we had been bumped; I could either get on a flight that was taking off in eight hours or wait until the next available flight – on December 19.

I abandoned the plans I had to say goodbye to my siblings and lay flowers on my Dad’s grave one final time and claimed the last seats on the plane. It seemed at every point I tried to farewell my father with dignity, Australia’s travel bans thwarted me.

Germany’s management of the coronavirus pandemic has been widely lauded as one of the best in Europe and we boarded that plane as healthy, free people, but disembarked as prisoners, treated as though we were highly infectious, even after wearing a face mask and shield the 24-hour flight home.

Hotel quarantine is a lottery. Some people score spacious suites at five-star hotels with lots of daylight. We were herded into the Meriton Suites on Sydney’s Pitt Street where I was shown a small studio with no direct sunlight. Hendrix and I were told to live there for the next two weeks.

To make matters worse, the tiny room was filled with the sound of the construction underway across the road. It would be difficult enough being a sole adult in these circumstances but with Hendrix to look after and try to entertain, the toll of this year hit me. I was at breaking point.

NSW Police rejected my two requests to move to a room with a separate bedroom, saying there were insufficient reasons. The mental health nurse told me to use earplugs to shut out the sound of the jackhammer – awesome advice for a five-year-old! 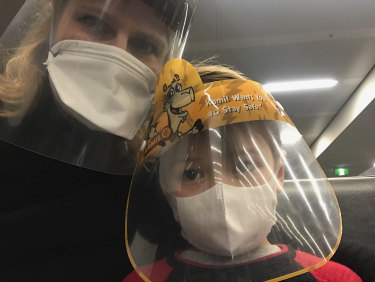 I asked hotel reception to forward an email setting out my mental state to the health team and police. When the nurse called for the scheduled COVID-19 check-up she said she had never received it.

After that things got better. A psychologist got in touch and the mental health team were so worried about me that they moved us to a hotel run by the Health Department instead of law enforcement authorities.

We have a bedroom each now, and a balcony where we can get fresh air and sunshine. But why did it have to take me nearing mental breakdown for humane conditions to be provided?

If a Health Department hotel can safely quarantine people in more compassionate conditions, why must others be administered under a crueller system?

Hotel quarantine is not just inhumane, it's unsustainable. Australians need to be able to leave and re-enter the country more freely and we can't wait for the roll-out of a national vaccine to do it.

I am heartened that the Prime Minister has indicated home quarantine is under active consideration. It surely must be part of the mix, with electronic anklet bracelets provided to ensure compliance .

The entire episode has caused me to ask myself uncomfortable questions about Australia. Why do small children have to suffer under these policies when we know they are the least at risk of contracting and spreading the virus?

Why does it seem to be that the crueller a coronavirus restriction or border ban can be, the more support among the Australian public it enjoys?

Astrid Magenau is a medical researcher. She and her son are due to leave quarantine soon.