Is this the world’s BIGGEST gender reveal? Dubai YouTubers tell their millions of fans they are expecting a boy with incredible light display on the side of the Burj Khalifa

In what could be the world’s biggest ever gender reveal party, two YouTubers announced that they are expecting a boy to their millions of followers with an incredible light show on the side of Dubai’s Burj Khalifa.

Influencer couple Anas and Asala Marwah, known as ‘Anasala Family’ on YouTube, shared a video to their channel on Tuesday which tells the story of them travelling to Dubai with their friends and family for the occasion.

Typically, a gender reveal party involves something like a cake, pinata, confetti cannon or a balloon, that when opened reveals pink or blue, giving the family a surprise when they learn the sex of the soon-to-be-born baby.

But the Ansala family took the increasingly popular tradition to new heights. 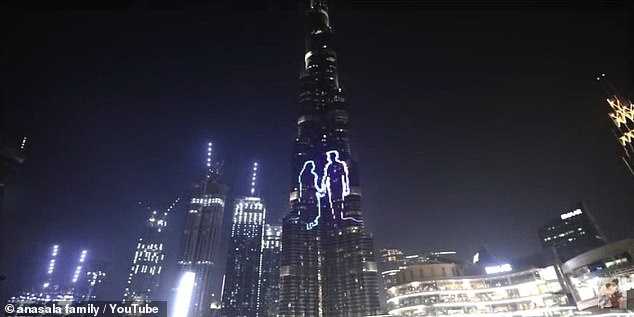 Swirling lines formed images on the side of the world’s tallest building before the countdown began, building the anticipation for the big reveal

The reveal was met with cheers from everyone watching, with the couple cheering and hugging their loved ones

The couple watch as the huge light show begins to count down from ten, before finally lighting up in bright blue with the words ‘It’s a boy’

The 15-minute video culminates in the couple – who married in 2017 – standing on a grand balcony, next to the world’s tallest building and holding Mila, their young daughter.

‘My heart is beating, I feel it is going to pop out of my chest and I feel much more excited than my wedding day,’ said Asala, as she headed to watch the show from a viewing spot next to the Dubai Fountain.

‘Regardless if it is a boy or a girl, I love you so much and I hope you watch this video in the future and know how much the Anasala family love you,’ he said.

The couple watch as the huge light show begins to count down from ten, before finally lighting up in bright blue with the words ‘It’s a boy’ emblazoned on the side of the building.

The couple – who have over 7.5 million subscribers on YouTube – are shown jumping for joy and hugging their loved ones, wiping tears from their eyes.

‘I cannot express myself because of how happy I am. It is hard to express our joy in words,’ said Asala, as the reveal was made.

Anasala family and their family and friends gathered on a viewing platform across from the Burj Khalifa, watching the countdown

Before the reveal, the video shows the couple telling the story behind the light show.

They explain that they are clueless about the sex of their new baby, and that the doctor handed the confirmation directly to their friend handling the surprise.

‘I am trying my best to give content that no one has ever seen before,’ Asala says to the camera during the vieo, as the family were readying ahead of the reveal. ‘To me, doing it in this way is something very big.’

Since being uploaded, the video has amassed over 15.5 million views, and has been met with their followers sharing thousands of congratulatory messages.

Some reports suggested that the display cost the couple £74,000, but speaking the the MailOnline, the couple said ‘We didn’t pay any amount to any entity to make this happen. Everything being said are rumours.’ 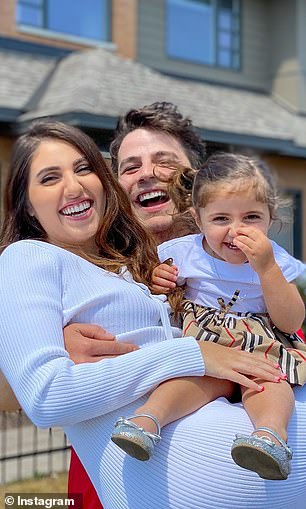 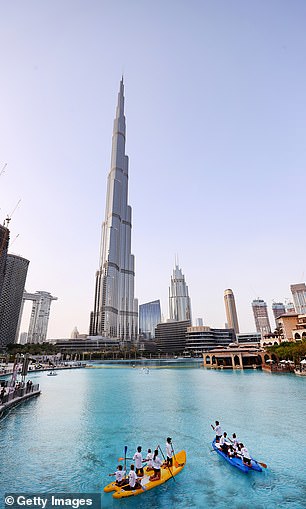 Anas and Asala Marwah, pictured with their young daughter Mila (left), travelled to Dubai for the gender reveal of their upcoming baby, and the light show on the side of the world’s tallest building, the Burj Khalifa (right)

A spokesperson for the family said ‘This was more than just a gender reveal, anasala were attempting to create content that has never been seen before worldwide! Which was accomplished.’

They said that the video ‘exceeded expectation’, and received 10 million views in the first 24 hours, with 1.2 million likes, and was trending worldwide.

The video was released amid criticism of gender reveal parties after one that was held in California that involved an explosive device sparked a wildfire that spread over 10,000 acres.

Blogger Jenna Karvunidis – the inventor of the gender reveal party – took to social media Monday to call on people to stop the celebrations.

Her comments came after it emerged a smoke-generating pyrotechnic device used to announce whether an expectant mom is having a boy or girl caused the massive El Dorado wildfire now ravaging part of the state.