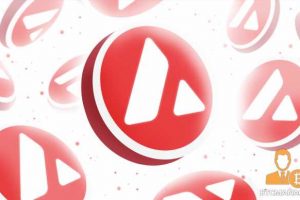 Avalanche (AVAX) temporarily overtook dogecoin (Dogecoin) as the world’s 10th-largest cryptocurrency during the early hours of November 22, 2021, as its market capitalization surged to nearly $30 billion.

While the over 12 percent crash in the price of the world’s flagship crypto, bitcoin (BTC) has triggered a widespread price correction across the entire cryptocurrency market, with the combined total market cap of the industry now at $2.57 trillion (a 2.67 percent decrease in the past 24-hours) Avalanche’s AVAX token has defied the downward trend thus far.

Per a report by Forbes, citing crypto market data aggregator, CoinGecko AVAX token hit the $134 price region on November 22, 2021, taking its market capitalization to just under $30 billion. At the time, Avalanche replaced dogecoin as the 10th-biggest crypto project in the world by market cap.

However, at the time of filing this report, Elon Musk’s dogecoin (DOGE) has reclaimed its number 10 position, trading around $0.22, with a market cap of $29.58 billion, while Avalanche’s cap sits at $29.39 billion.

It will be recalled that on November 16, 2021, Emin Gun Sirer, the founder of Avalanche and CEO of AVA Labs took to Twitter to reveal that the project has signed a partnership deal with ‘Big Four’ professional services firm, Deloitte, for the development of more efficient disaster relief platforms that will be powered by the Avalanche network.

Known as the “Close As You” platform, Sirer says the project will leverage the Avalanche blockchain to boost the security, speed, and accuracy of the Federal Emergency Management Agency (FEMA) funding.

“The new platform gives state and local officials a decentralized, low-cost and fully immutable system that empowers both the grant funders, and the aid recipients while using the transparency of blockchain to minimize fraud, waste, and abuse,” tweeted Sirer.

Shortly after the announcement, AVAX hit a new all-time high of $104, with a market cap of just $23 billion and it’s not a surprise that the highly scalable Ethereum competitor has continued its upward momentum this week.

Launched by Ava Labs in 2020, Avalanche claims to be the fastest blockchain network in the world, with a transaction speed of more than 4,500 TPS. The Avalanche ecosystem is currently home to more than 120 decentralized applications and blockchain projects, according to DappRadar.