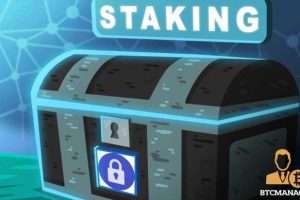 Cudos Network, a platform currently in development based on the interoperable Cosmos rails, has said it would activate staking services for its CUDOS ERC-20 token on August 2, an update on July 16 reads.

Staking of CUDOS ERC-20 tokens will run until after Cudos Network launches its mainnet.

The development team has been working round the clock to ensure that its smart contracts are secure. The Cudos Network emphasized the user interface, ensuring that would-be stakers have an easy time locking assets.

CUDOS staking APR will start at around 30 percent—a rate offered at AscendEX. However, this APR is subject to change depending on the number of tokens locked in the smart contract. It will also involve validators and staking delegation to reflect the mainnet validator-delegator architecture.

To begin staking, CUDOS token holders will require MetaMask wallets, ETH to pay Gas fees, and CUDOS tokens which must be locked in exchange for the high yield.

As of writing, pre-staking services of CUDOS were live on the AscendEX and Kucoin exchanges. In both exchanges, interest is high.

Already, the maximum CUDOS cap required for staking has been reached in Kucoin. While in AscendEX, over 260 million CUDOS tokens have been staked.

Staking allows the community of token holders to secure the network by locking their assets for a given period in return for a fixed yield pro-rated depending on the staking time.

Analysts say this is a practical, energy-efficient means of securing respective chains while concurrently preserving the environment, unlike mostly legacy consensus algorithms like Proof-of-Work.

The Cudos Network aims to bridge the gap between cloud and blockchain by leveraging the current computing power distributed across various devices.

This way, the project aims to meet divergent computing needs in a sustainable and decentralized manner.

This level of versatility is due to the underpinning Cosmos blockchain, which recently activated its Inter-Blockchain Communication (IBC) Bridge, effectively becoming fully functional. Besides, the Cudos Network will support Oracles allowing dApps to connect to verified off-chain data.