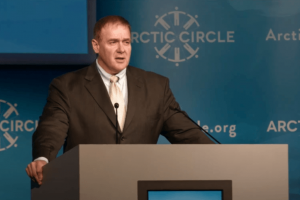 Last week, during an interview, Scott Minerd, Global Chief Investment Officer of Guggenheim Partners, the man who said last December that “Bitcoin should be worth about $400,000”, talked about silver, gold, and crypto.

Guggenheim Investments is “the global asset management and investment advisory division of Guggenheim Partners and has more than $233 billion in total assets across fixed income, equity and alternative strategies.” It focuses on “the return and risk needs of insurance companies, corporate and public pension funds, sovereign wealth funds, endowments and foundations, wealth managers and high net worth investors.”

On 27 November 2020, according to a U.S. SEC post-effective amendment filing, it became known that one of Guggenheim Investments’ fixed income mutual funds (“Macro Opportunities”) was considering investing in Bitcoin. Per data by the Financial Times, this fund was launched on 30 November 2011, and its total net assets was $4.97 billion (as of 31 October 2020).

The SEC filing made on 27 November 2020 is known as an “SEC POS AM” (aka “post-effective amendment”) filing. This type of filing “allows a company registered with the SEC to update or amend its prospectus.”

This filing stated that the fund is considering getting some cryptocurrency exposure:

“Cryptocurrencies (also referred to as ‘virtual currencies’ and ‘digital currencies’) are digital assets designed to act as a medium of exchange. The Guggenheim Macro Opportunities Fund may seek investment exposure to bitcoin indirectly through investing up to 10% of its net asset value in Grayscale Bitcoin Trust (“GBTC”), a privately offered investment vehicle that invests in bitcoin.”

Then, on 16 December 2020, after the Bitcoin price had finally broken through the $20,000 level on all crypto exchanges to set a new all-time high, Minerd, the Guggenheim CIO, talked about Bitcoin during an interview on Bloomberg TV.

The interview started by the Guggenheim CIO being asked by Scartlet Fu, Bloomberg TV’s Senior Editor of the Markets Desk, about the Guggenheim Macro Opportunities Fund and the decision by its managers to invest “up to 10% of its net asset value in Grayscale Bitcoin Trust.” In particular, he was asked if Guggenheim had started buying Bitcoin yet and how much this decision was “tied to the Fed’s extraordinary policy.”

“To answer the second question, Scarlett, clearly Bitcoin and our interest in Bitcoin is tied to Fed policy and the rampant money printing that’s going on. In terms of our mutual fund, you know, we are not yet effective with the SEC. So, you know, we’re still waiting.

“Of course, we made the decision to start allocating toward Bitcoin when Bitcoin was at $10,000. It’s a little more challenging with the current price closer to $20,000. Amazing, you know, over a very short period of time, how big run-up we’ve had, but having said that, our fundamental work shows that Bitcoin should be worth about $400,000. So even if we had the ability to do so today, we’re going to monitor the market and see how trading goes, what evaluation that ultimately we have to buy it.”

He then explained how they came up with the $400K valuation for Bitcoin:

“It’s based on the scarcity and relative valuation, such as things like gold as a percentage of GDP. So, you know, Bitcoin actually has a lot of the attributes of gold and at the same time has an unusual value in terms of transactions.“

Then, on January 11, shortly after the Bitcoin price had corrected to as low as $32,475 on Coinbase, Minerd cautioned traders that Bitcoin might have gone up too much too fast and that perhaps it was time to take some profits.

On February 2, the Guggenheim CIO was interviewed by CNN anchor Julia Chatterley, who asked him what he thinks about Bitcoin.

“We’ve been looking at Bitcoin for almost 10 years and the size of the market just wasn’t big enough to justify institutional money. As the total market cap of Bitcoin got bigger, around $10,000, it started to look very interesting and my view is we get a lot of fundamental research and if you consider the supply of Bitcoin relative let’s say to the supply of gold in the world and what the total value of gold is, if Bitcoin were to go to those kinds of numbers, you’d be talking about four hundred to six hundred thousand dollars per Bitcoin.

“Now, I’m not saying we’ll ultimately get there, but that’s an indication of what might be a measure of fair value. Tthat gives you a lot of room to run, but then when you consider that within a course of a month, we went from $20,000 to $40,000 on Bitcoin, that smacks of short-term speculation…now the air’s coming out of that speculative run, and so the money is migrating into other places…

“I don’t really see the institutional support today, which is just coming online from the likes of people like BlackRock and Guggenheim and other large institutional investors being big enough to support the valuation at its current levels… Bitcoin has had a lot of times where it’s had setbacks of 50% from its highs. I wouldn’t be surprised to see that happen again…

“I think that cryptocurrency has come into the realm of respectability and will continue to become more and more important in the global economy.“

On April 7, Minerd was again interviewed by CNN’s Julia Chatterley, who wanted to know what would happen to the crypto space if there was a pullback in the price of Bitcoin.

“When I made the $400,000 statement, I’m looking at it over a period of time 10 to 20 year. Of course, the market took off. I first started looking at buying Bitcoin at $10,000. Today, I don’t know where we are anymore. It’s become so rich so fast, maybe around $50,000, but it clearly has gotten caught up in the speculative bubble that GameStop got into and a number of these other stocks.

“I think when we get a risk-off moment, we could be seeing Bitcoin pullback to somewhere between $20,000 and $30,000, but I think for long-term investors that’ll be a great entry point.”

On May 19, however, Minerd appeared to be much more bearish on crypto in general.

Well, on May 25, the Guggenheim CIO was interviewed by CNBC’s “Worldwide Exchange“, where he shared his latest thoughts on Bitcoin, gold, and silver.

According to a report by Kitco News published on May 26, this is what he had to say:

“As money leaves crypto and people are still looking for inflation hedges, gold and silver are going to be much better places to go.“

Minerd expects gold to reach as high as $10K per ounce in the long term:

“This is ultimately is in the cards. Silver traditionally lags. It is the poor man’s gold, and it’s the one that will have the largest move on a percentage basis. It is the high-beta version of gold.“

As for his long-term outlook on crypto, although he thinks that Bitcoin and Ethereum will remain popular, he thinks the ultimate winner might be a crypto project that we have not seen yet:

“AOL was the winner. Yahoo was the winner. Then Google and other players came along. We are going to find out that some new crypto comes long, which can overcome some of the issues we are facing right now with the cost of mining, all the carbon production. And it will be a superior form of crypto, and that will become the dominant crypto.“