Home » Altcoins » JPMorgan Chase CEO on Bitcoin: How Do We Know Supply Is Capped at 21 Million?

JPMorgan Chase CEO on Bitcoin: How Do We Know Supply Is Capped at 21 Million? 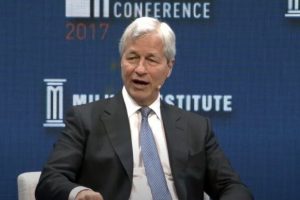 On Thursday (19 January 2023), Jamie Dimon, the Chairman of the Board and CEO of global finances services firm JPMorgan Chase & Co., shared his thoughts on blockchain and crypto during an interview on CNBC’s “Squawk Box” from the World Economic Forum (16-20 January 2023) in Davos, Switzerland.

Dimon, who likes blockchain technology, but is a well-known harsh critic of Bitcoin and other cryptocurrencies, made these comments while being interviewed by Joe Kernen, Becky Quick, and Andrew Ross Sorkin, who are co-anchors of “Squawk Box”.

“Why you guys waste any breath on this is totally beyond me… Bitcoin itself is a hyped-up fraud. It’s a pet rock…Blockchain is a technology ledger system that we use to move information… We’ve used it to do overnight intraday repo… We’ve used it to move money… So that is a ledger. That’s a technology ledger type of thing that we think will be deployable, but remember we’ve been talking about that for 12 years too, and very little has been done.“

And when Kernen tried to defend Bitcoin by saying that it is based on a distributed ledger and has all the characteristics of a store of value and it is scarce because there can only ever exist 21 million bitcoins, Dimon interjected to say:

“Oh yeah, really? How do you know it’s going to stop at 21 million?… Everyone says that… Maybe it’s going to get to 21 million and Satoshi’s picture is going to come up and laugh at you all… And by then, Satoshi will have taken billions of dollars.“

As for the collapse of crypto exchange FTX, Dimon had this to say:

“I’m not surprised at all. I called it a decentralized Ponzi scheme. The hype around this thing has been extraordinary. It’s outrageous. Regulations should have stopped this a long time ago… People lost billions of dollars.“

On 6 December 2022, Dimon was asked by Andrew Ross Sorkin about the collapse of FTX and if he agreed with U.S. Treasury Secretary Dr. Janet Yellen’s assessment that the FTX collapse is “a Lehman moment within crypto”.

“I think crypto is a complete side show… And you guys spend too much time on it, and I’ve made my views perfectly clear: crypto tokens are like pet rocks.