Kusama Adds Bifrost as the Latest Parachain after Winning Auction 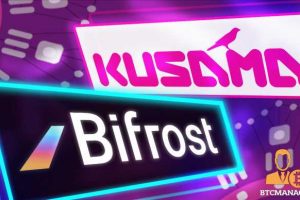 Bifrost is now the sixth Parachain on the Polkadot canary network, Kusama.

Bifrost Wins to become the Sixth Parachain on Kusama

As per a post on Twitter on July 20, the project, which allows for staking liquidity on Polkadot’s Substrate, won the fifth and final Kusama Parachain auction slot, raising over 139k KSM coins from more than 5k unique addresses.

133k KSM voted for the Kusama crowd-loan while slightly over 5.8k KSM reserves favored the creation of initial liquidity of vsKSM.

Like other Parachains, Bitfrost will exist independently on its chain, adopting its unique consensus algorithm but will draw its security from Kusama.

Bifrost is a part of Polkadot’s DeFi infrastructure and is a protocol aiming to provide staking liquidity. However, it eventually aims to be a layer between staking and dApps. At the moment, the platform offers derivative vToken for Staking and Polkadot Lease Offering (PLO).

Last week, Bifrost upgraded to Polkadot v0.9.8 and successfully produced blocks on the Westend while enhancing its node.

For instance, there was Genesis reconciliation and adjusting the running time of Kusama to accelerate its Parachain registration speed while in test.

At the same time, the Bifrost development team upgraded Asgard CC4 and its dashboard.

These changes were less than a week after Bitfrost announced their slot bidding sprint plan, where the overall reward was doubled but for a limited time.

Several AMAs have been conducted in the run-up to today’s announcement.

Bifrost Will Weather the Bear Cycle

Most notably, Bitfrost becomes a Parachain hoping to crowd-fund in a bear cycle.

In a recent AMA, a representative said they are confident the project will weather the storm.

In his view, the sustainable and profitable banking on the success of vToken, a derivative asset issued for staking. The project will be kept going by a stream of revenue offered from several services.

For instance, as per their whitepaper, the project will withdraw 10 percent of the staking commission as funds for the repurchase of Bitfrost’s native token, BNC.

At the same time, the source of revenue for staking will be from offering security through staking in other Proof-of-Stake consensus algorithm networks.

As BTCManager earlier reported, the launch of Kusama Parachain Auctions marked a significant milestone for the project.