Moonriver (MOVR) Completes Phase One of Its Launch Process 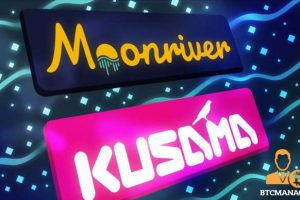 Moonriver (MOVR) has successfully moved into phase one of its launch process, making it the first live Kusama (KSM) parachain to have an open and permissionless collator set powered by a custom parachain staking pallet.

Moonbeam, the Ethereum-compatible smart contract platform powered by Polkadot (DOT), has announced that Moonriver (MOVR), its sister network on Kusama (KSM), has reached another significant milestone in its five-phase launch process.

Moonriver won a parachain slot on Kusama earlier in June, to become the second parachain on the network. However, since that time, the Moonriver team has fast-tracked their work towards launching the network and Moonriver has now outpaced even Karura to become the first live Kusama parachain to put in place a transparent and permissionless collator set powered by a parachain staking pallet.

As reported by BTCManager on June 29, 2021, Moonriver started producing blocks on Kusama, as part of phase zero of its launch process. Fast forward to July 9, and the team, not resting on its oars, has now entered the first phase of the launch process.

As stated in a blog post, phase 1 of the Moonriver launch process focuses on making the network more decentralized by bringing in community-run collators that will handle block production for the network.

For the uninitiated, collators function more or less like miners in a proof of work distributed ledger like bitcoin (BTC). In Kusama, collators ensure that parachains are running optimally by collecting parachain transactions from users, aggregate these transactions into parachain block candidates and produce state transition proofs for validators based on those blocks.

What’s more, the team says its major focus during phase one is to carefully monitor the decentralized collator set to ensure its working in a frictionless way with Moonriver, the Kusama Relay Chain, and its validators.

Once that is achieved, and the block production on the network remains stable, the team says phase two of the launch process will begin. During phase two, on-chain governance will be activated.