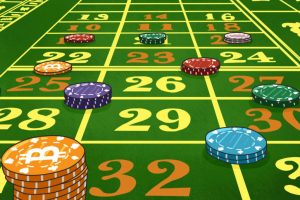 Crypto-enabled live poker is going to be the next big thing in the coming years. The global pandemic instigated the closure of casinos and card rooms worldwide. However, through virtual live poker, the industry has somewhat been able to revive. Some of the most anticipated poker games have been the Berrycast which was hosted by Jefferson Nunn on May 13 and the upcoming Virtue Poker.

Due to the fairness issues in online poker, it was among the earliest games to join blockchain. Users worldwide can join the platforms to verify the security of their funds. Because of the anonymous nature of this payment mechanism, the discretion to use Bitcoin for transactions did not hurt, which allowed regulated players to participate within the geographical limit.

A game such as Virtue Poker uses smart contracts to bring about decentralization where cards are randomly shuffled. The shuffling is certified as fair by Gaming Labs International (GLI). The funds are also never held inside the app.

Poker in the World of Blockchain Technology

Blockchain Poker is also a blockchain-based poker game with tournaments. It allows users to gamble on cryptocurrencies, but it only offers BCH, BTC, and BSV. CoinPoker is another such platform. It is wholly based on blockchain technology and uses USTD stablecoin as the main currency in games. CoinPoker also uses CHP as a bonus fuel that provides the players with unique support for future developments in their general community.

In a blockchain-based poker game, the hosts do not have to maintain binders that have every player’s poker chip after every round. Instead, information with the number of chips possessed by each player is shared and stored in the blockchain at the end of the round.

Also, instead of poker chips, a cryptocurrency is used as an exchange. This illustration is a clear illustration of how groundbreaking blockchain technology is.

The world of poker has not yet accepted the concept of Bitcoin in its totality, despite its many advantages. It has not been around for long, and it is still hard for the traditionalists to trust it. There are barriers to solve before it can become the primary method of payment for poker and casino.

Take into account first and foremost that bitcoins are a digital entity. As a result, it is considered hacker-prone, among other cyber risks. Although it is built on blockchain technology, which is safe, hackers can get past the safeguards in other ways.

Furthermore, there is the problem that new types of cryptocurrency are continuously being launched, which constantly flood the market. Although it is all well and good to explore, the challenge lies in creating more competition for all. Instead of working together, everyone fights by competing for their portion of the crypto pie.

The vast benefits of blockchain technology are still being scratched on by online gaming companies, which are great for connecting and converting online poker enthusiasts.