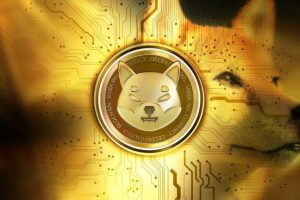 The meme-inspired cryptocurrency Shiba Inu ($SHIB) is currently leading the “trending” charts on popular crypto aggregator websites after it was listed on one of South Korea’s largest crypto trading platforms by volume.

In a recently published announcement, Seoul-based exchange Upbit, which has been registering more trading volumes than any other exchange in the country after Binance, revealed the listing of a $SHIB pair trading against the South Korean Won (KRW).

At the time of writing, $SHIB is the number one trending asset on CoinMarketCap as a result of the listing, and it’s followed by the flagship cryptocurrency Bitcoin ($BTC), Fetch.ai ($FET), PancakeSwap ($CAKE), and smart contract platform Solana ($SOL).

The meme-inspired cryptocurrency has been surging over the last few weeks ahead of the expected launch of Shibarium, its layer-2 scaling solution. Over the past 30 days, $SHIB is up over 40%, while $BTC moved up 26%.

As CryptoGlobe reported, Shiba Inu’s market capitalization has risen by nearly $2 billion over the last 30 days to surpass $6.4 billion. The largest whales of the Ethereum ($ETH) network have accumulated around $85 million of $SHIB ahead of the layer-2 scaling solution’s launch, and at a time in which the meme-inspired cryptocurrency partnered with the North American luxury brand Bugatti Group involved the minting of non-fungible tokens (NFTs) in a “special event” in which the Bugatti Group hosted a “mint party and space” dedicated to Shiboshis.

According to an account associated with the meme-inspired cryptocurrency, the special mint collection “sold out in the first 4 minutes” of the event as demand for the tokens far exceeded supply.

Shiboshis are non-fungible tokens (NFTs) exclusive to the Shiba Inu ecosystem that were launched back in October 2022. The partnership brought “physical items and collectible NFTs” to Shiboshi holders.

A total of 299 limited releases and a “very exclusive 1st edition release” were minted at the event for 0.14 ETH each. 95% of mints received a “Cross Body limited edition Luggage Bag” from Bugatti Group, while 5% received a  limited edition Carry-On item from the group. These were rewarded to 15 NFT minters while allowing them to place their own Shiboshi design on the bag.

As for Shibarium the layer-2 solution aims to improve the Shiba Inu ecosystem by providing faster transactions at a lower cost, among other important improvements.