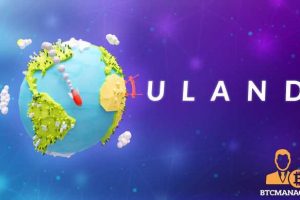 ULAND ($ULAND) is gearing up to launch the world’s first virtual land, revenue-generating NFT ecosystem that mirrors the real world. Virtually all countries and places of interest in the world will be represented in ULAND and anyone can purchase these highly valuable NFTs and be the supreme rulers of their chosen jurisdictions.

Just like during the crypto markets bull run of 2017, when NFTs, led by CryptoKitties and others, officially put themselves in the consciousness of the masses, 2021 marks the beginning of the Metaverse revolution, a movement powered by super rare, highly valuable non-fungible tokens.

While Metaverses such as Decentraland (MANA), The Sandbox (SAND), and others have already started gaining significant traction across the globe, as evidenced by the exponential price surge of their native tokens, the metaverse revolution is only just getting started and ULAND is creating something never seen before in the industry.

According to the creators of this novel project, while ULAND is simply virtual earth built on the blockchain, it is completely different from existing Metaverses, as it’s the first-ever platform that mirrors all the geographical locations on planet earth, via super unique NFTs.

In essence, in the ULAND Metaverse, there can only be one USA, El Salvador, one China, one Australia, one Miami, just name it! and anyone can purchase any of the locations they love and become the ultimate rulers of these jurisdictions.

“ULAND isn’t about changing the world, we just wanted to take the best of what the world has to offer and make it slightly better, where people can learn about each other’s cultures, languages, customs…have fun, make friends and earn some good money along the way. That’s what ULAND is about,” explains the team.

Building upon the success of its pre-sale event, which saw 100 percent of its Tier 1 Land Asset NFTs (countries) sold out, excepting Ethiopia, the ULAND team has chosen December 15, 2021, 06:00 UTC, as the official launch date of the ULAND Metaverse.

If all goes as planned, the official ULAND roll out on December 15, will include the unlocking of Tier 2 Land Asset NFTs (States/Regions/Provinces), with a new tier of passive income distributions, enabling Tier1 NFT Land Asset holders to earn a certain percentage of the minting fees and sales of Tier 2 Land Assets under the countries they rule.

The official ULAND launch will also mark the birth of its decentralized autonomous organization (DAO) model, where $ULAND holders who own Tier1 Land NFTs will be given the power to unlock Tier2 ULAND Assets and $ULAND will officially become the native token of the ecosystem, replacing BNB.

The team also aims to integrate more interactive features into ULAND, make improvements to the World Marketplace, and make the platform more user-friendly via the December 15th release.ULAND landowners will be able to rename their countries/states/provinces and choose titles such as King, Queen, President, etc for themselves. Members of the ULAND ecosystem will also be able to view all the details of their portfolio in real-time, including the breakdown of their rewards and earnings.

“We hope to build a Metaverse that has something for everyone. Investors will be rewarded straight away and see their ROI quickly. Gamers can enjoy visiting our virtual world and play-to-earn arena. Corporates can provide services and utilities for people. We’ve got big plans for the future!” the team added.