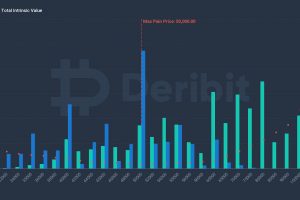 It’s the last Friday of the month with $1.8 billion worth of bitcoin options to expire tomorrow on Deribit, a futures and options platform.

That makes it one of the biggest expiries, with $1 billion in intrinsic value at expiration betting bitcoin won’t reach $40,000.

Bitcoin’s current price is $39,700 and just about touched $40,000, with still about 24 hours left to go until these contracts are forced closed.

Most however are betting that bitcoin won’t reach $50,000 by tomorrow with that being the max pain point, a relatively new concept relying on the hypothesis that bitcoin’s price will go to where most people are liquidated.

About $1.8 billion in intrinsic value has placed calls, which is the equivalent of short or sell, at $50,000.

So if bitcoin reaches that point within 24 hours, a lot of people will be rekt for being bear.

Chances are slim of that happening however as a 10k green candle appears unlikely with the market currently best described as a very very timid bull.

Opinions are split. Bears still cling with their stone heads to bear market forever, praying to Allah or whatever god they have that this goes to $20,000 or for some of them preferably to zero.

Bulls however see a bit of hope primarily because for four days now this hasn’t been falling, but has kind of been rising very littley.

Even Canada, Canada!, bought some yesterday before going back to kind of selling, with Shanghai too buying then selling, in what is clearly a gentle but fierce quiet battle between bulls and bears.

With these options expiring tomorrow, a new round then begins as summer arrives with it to be seen whether it does so with a bang.

That’s because we have a combination of futures and options expiry, a timid bull trying to gain courage, and a three days weekend when Americans can’t play – well the ones relying on snail banking.

So max pain arguably would be a bull run during the weekend with those that sold watching helplessly as the train leaves the station without their fomo on board, kind of like the Europeans did earlier this week.

Alas realistically we might instead get sidewayish but kind of up unless we’re really getting a bear market mid-way without the needed training to buy the dip becoming so ingrained that people stop believing it won’t work when the real bear shows up.