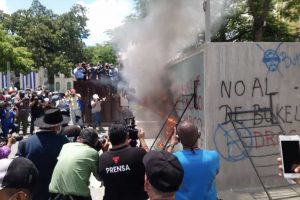 A bitcoin ATM has been burned and two others damaged during protests on their independence day in San Salvador.

Thousands marched generally peacefully but at the plaza in front of the National Palace, the ATM was set on fire.

There’s images of a Salvadorian flag being thrown to the fire too with this being the first time as far as we are aware that a bitcoin ATM is burned or damaged.

“A total of three ATMs were damaged, but those other two were not destroyed,” says a protestor who took images of the event.

No bitcoins are lost because they’re not in the ATM, but these are two ways, so USD – El Salvador’s national currency – may have been lost.

“They say that the ‘vandalism’ was done by ‘infiltrators,’ but they have vandalism in ALL their manifestations,” said Nayib Bukele, El Salvador’s president.

Bukele has been featured in Times 100 as one of the most influential person in the world alongside Joe Biden and Xi Jinping, no other well known politician.

He was presumably featured for his influential decision to declare bitcoin as legal tender, the first country in the world to do so.

But the introduction is only criticisms by what sounds like a biased journalist, accusing the president of entering into a deal with gangs in a country that had the highest homicide rate in the world. Something that has significantly lowered crime rates.

He also accuses the president of firing Supreme Court judges and replacing them, with the Legislative Assembly there voting to remove them in May due to “arbitrary” decisions in addition to firing the Attorney General Raul Melara, considered close to an opposition party.

Elisa Rosales of Bukele’s New Ideas party said there is “clear evidence” that the five judges had impeded the government’s health strategy and that lawmakers had to remove them to protect the public.

Bukele is further accused of sending military officers into parliament in February 2020 to secure the approval of a $109 million loan from US for his security plan, called “Plan Control Territorial,” after which his party won the majority of seats in parliament, with Bukele increasing term limits to two, in line with US and other countries.

In addition he’s put his country on the map to the point he is now one of the most influential person in the world with there being no serious criticism of the president since he was introduced to this space at Consensus 2021 as far as we are aware.

Where bitcoin is concerned the opposition says they’re only against making it mandatory to accept, which technically isn’t true as the merchant can receive dollars despite being paid in bitcoin so they don’t have to accept bitcoin itself.

Studies further suggest Western Union is set to lose some $400 million in remittance fees to El Salvador due to bitcoin competition.

With there potentially being geopolitical aspects here as well because many small countries near USA that dollarized may well give USD some competition.