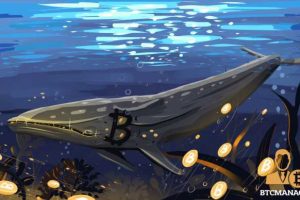 Institutional Bitcoin big whales have continued to take advantage of the current bitcoin (BTC) price dump to beef up their portfolios. Bitcoin whale addresses holding between 100 to 10k BTC kicked off July with a massive 60,000 BTC accumulation, making it the highest daily bitcoin buy so far in 2021, according to a Santiment report on July 4, 2021.

While no one knows for sure whether this season’s crypto markets bull run is over or not, heavyweight institutional investors remain confident in the world’s flagship cryptocurrency and they have continued to buy the dip, as paper hands run for dear life.

Specifically, the firm has made it clear that the whales that added more BTC to their existing large portfolios are those already holding between 100 to 10k BTC in a single wallet. The researchers say these addresses presently hold a combined 9.12 million BTC, about 100k more than the amount held in the past month.

The analysts say the fresh inflow of institutional monies into bitcoin is partly responsible for bitcoin’s momentary surge to almost $36k yesterday. However, it appears the flagship crypto has resumed its downward movement once again, as the bitcoin price is currently hovering around $34,346.

While early bitcoin investors are still very much in profit, as the price of the digital currency is still up by more than 250 percent in the past year, life has not been easy for industry newcomers due to the current over 50 percent dip in the bitcoin price since hitting its $64k all-time high earlier in April.

With China and bitcoin miners still not seeing eye to eye, resulting in an over 54 percent drop in the bitcoin hash rate, things appear a bit gloomy for the world’s number one crypto in the short term. Whether bitcoin (BTC) will overcome the odds and close above $40k this July remains to be seen.