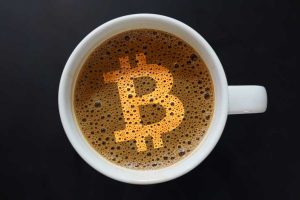 As part of the continued demonization of gold at the hands of Bitcoin, the precious metal that was once the hard money standard has received the boot from popular daily email newsletter Morning Brew.

Due to the rising popularity of Bitcoin, gold has been completely replaced with a price ticker instead for the leading cryptocurrency by market cap. Here’s why this is such a big thing, and why this is just one win of many more to come.

The ongoing “digital gold” narrative has taken the momentum out of gold’s bull run, and converted it into rocket fuel for Bitcoin. In less than one year, the cryptocurrency’s market cap rose from under $200 billion to more than $1 trillion and climbing.

Over time, it’s expected to eat away at gold’s $10 trillion market cap, and it already has put an end to the precious metal’s bull run in 2020. Just as gold began to peak, outflows from hedge funds went directly into the scarce crypto asset, which was expected to outperform gold by a substantial margin.

Those who bet on Bitcoin, were ultimately correct. Since the big breakout beyond the 2017 peak, the cryptocurrency asset class has gone through a secular shift, where institutions and a completely different asset class have begun to include the emerging technology within their previously traditional portfolios.

And as Bitcoin popularity has picked up, it has led to an enormously popular daily email newsletter dropping gold from their morning market reports for the cryptocurrency instead.

Morning Brew Shakes Up Market Section With Trending Ticker, Transitioning Away From Traditions

What’s old is often new again, and newsletters are making a comeback. No one has done it better, however, than economic and social wrap up Morning Brew, amassing more than 2.5 million subscribers. The newsletter includes updates on what’s trending globally, and has a section with price tickers for major stock indices like the Dow Jones, Nasdaq, S&P 500, as well as the 10-year Treasury yield.

Previously, it also included gold and oil – two of the most important natural commodities the world has ever known. However, it’s replaced gold with Bitcoin, and oil with a “flex spot” which will be used to showcase any trending asset. For example, when Dogecoin was the talk of Twitter and elsewhere online recently, it could be featured in that spot.

This also means that Bitcoin is there to stay, and isn’t just another trending coin or stock of the day. It has cryptocurrency bulls cheering, celebrating such a victory over gold – one of many wins in the future, they hope. It has the likes of Peter Schiff, however, boiling inside.