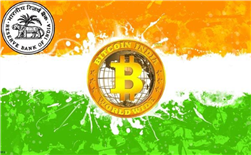 India is the world’s third largest economy, and is set to grow at a rate that may surpass that of China within a few years. In Prime Minister Narendra Modi’s vision of a Digital India, a lot of emphasis has been placed upon cultivating technology to solve the most rudimentary of purposes and tasks. This is a vision that advocates and strives to computerize everything a common man encounters daily. It has been heralded by the media as the genesis of the greatest technological revolution yet in the country. One of the first steps taken by the Modi government, in order to set the ball rolling for Digital India, was demonetization. Two of the highest denominations of bills in circulation, Rs 1000 (about $14.80) and Rs 500 (about $7.40), were discontinued and replaced with newer bills that incorporated tracking technology.

It’s like if the Fed were to say tomorrow that, effective immediately, the $100 and $50 bills are no longer in circulation, and will be replaced by newer bills. Since the old bills are no longer legal tender, people who have a lot of black money (income not reported/paid taxes on) will be out of that said money, since they can’t use it.  They couldn’t even go to the banks and ask for it to be exchanged for the newer bills in circulation, because the Fed had put a threshold value on it depending on their income, and the threat of being flagged down by the IRS loomed large over their heads. The IRS would ask how these people have so much extra cash when they haven’t made a withdrawal this big recently. In India, these 2 scrapped high-denomination bills accounted for about 86% of the exchequer’s currency by value; in a country where about 90% of the transactions happen in cash, the economy slowly started to tank. There were also withdrawal limits put on the new bills in circulation. 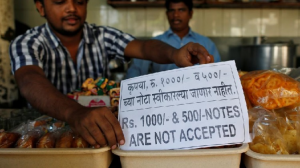 The media narrative was that it was a masterstroke aimed at ridding black money in order to combat the problems of drugs, terrorism, and corruption. What happened in reality, though, belied the official narrative. The abrupt nature of the announcement, along with the shortage of new bills, brought about widespread panic and significant disruption to the economic output. Over 3 dozen people died from waiting in the extremely long lines at ATMs in the blazing heat. It was the poor and the middle class who suffered and lost their money, whereas the rich siphoned theirs off and found ways to beat the system through illegal and immoral means by converting their black money into white. Similarly, one of the salient features of Modi’s Digital India has been the push for a cashless society: A society where the use of technology is so far widespread in daily life, that it eliminates the need for carrying cash. This was a platform supported and backed by the private sector, by companies such as Pay-TM (India’s version of PayPal), Uber, etc. However, any person aware and versed in the dark arts of government propaganda will know better than to fall for that.

Snowden was the whistle-blower covered extensively by US media as it brought to light unethical, illegal mass government surveillance and the plethora of underlying problems. India has it’s own mass surveillance program, led by NTRO, that has capabilities much greater than and beyond the scope of GCHQ and NSA. However, in countries plagued by poverty and other ‘real’ world problems, people seldom even bat an eye at such ‘first world problems’ like mass surveillance. No major media outlets cover it, and it’s safe to assume that it won’t be hotly debated it in the country anytime soon. However, India is known for its technical prowess, for aiding Silicon Valley in scaling the heights it has reached to this point. A huge number of youngsters are well versed in the latest technologies and use TOR, VPNs and other means to ensure anonymity and privacy. These people are what constitute the majority of the market for cryptocurrencies in India. Bitcoin is well known to this niche group, but other emerging non-mainstream cryptocurrencies lack proper exposure. However, this subset of the population is still miles ahead of the rest of the uninformed masses, who are completely clueless about Bitcoin or even the concept of cryptocurrencies. 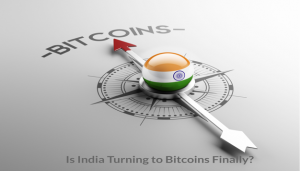 Most people believe that India has a long way to go before it can be considered one of the top trading markets for cryptocurrencies. There is lethargy among the masses: the struggle to earn enough money to feed themselves three meals a day is so consuming, that it leaves no room for existential, self questioning. People blindly buy into official narratives and governmental propaganda without second thought. There lacks a culture of questioning things that form the basis of human civilization and daily life: the existence of governments, how money works, how banks work, why our economy and establishment always seem to fail the people.  The basis for the existence of Bitcoin and other cryptos lies in the conviction that every human’s civil rights need to be upheld. Most crypto users would call themselves conspiracy theorist to a certain degree, or at the very least independent thinkers who question the status quo. This kind of intellectual stimulation can only happen when the idea of Bitcoin is publicised among the masses, and education about cryptocurrencies starts from the grass-root level. The Government has taken some steps that clearly signal toward a brighter future for Bitcoin: the introduction of cryptocurrencies at school and college levels indicates that Bitcoin is making its entry in India sooner than most people think.

Despite all the barriers in front of Bitcoin for the Indian market,  government officials have released information that within the next year, Bitcoin may be legalized as a ‘regulated currency’ in India. Details have not been discussed as of yet, but the entrance of Bitcoin in the third largest economy of the world is something that will surely intrigue most Bitcoin enthusiasts.