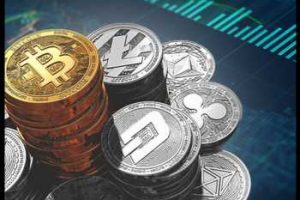 Cryptocurrencies tracked the Wall Street’s gains to rise more than 4 percent in the past 24 hours. European benchmarks too finished trading with gains, shrugging off fears of a recession.

Ether outperformed Bitcoin with a 9.4 percent overnight rally. It has gained 10.3 percent in the past week. However, it has lost close to 70 percent in 2022. Ethereum currently dominates 15.4 percent of the crypto market.

3rd ranked Tether managed to strengthen its market cap marginally to $66.93 billion, versus $66.92 billion, a day earlier. Tether recently announced that it would launch a stablecoin pegged to the pound sterling.

XRP jumped from 8th spot to 6th spot, surging more than 11 percent in the past 24 hours amidst reports that Ripple has gained an upper hand in the SEC Lawsuit.

8th ranked Cardano (ADA) gained 4.9 percent in the past 24 hours to trade in the green zone on a weekly basis.

25th ranked NEAR Protocol (NEAR) gained 11 percent overnight and as well as in the previous week.

59th ranked THORChain (RUNE) a decentralized liquidity protocol that allows users to exchange cryptocurrency assets across a range of networks continued to gain after its recent announcement that it has achieved mainnet status. It has gained 13 percent in the past 24 hours and 27 percent in the past week.

100th ranked Harmony (ONE) declined more than 4 percent overnight following its admission that $100 million has been stolen by hackers in an attack on the Horizon Bridge. The Horizon Bridge enables token transfers between Harmony and the Ethereum network, Binance Chain, and Bitcoin. The hack has happened despite industry experts raising concerns in the past on critical security issues related to cross-chain bridges.

15th ranked UNUS SED LEO (LEO) is trading with losses of more than 1 percent, despite the momentum in the broader market.

Industry-specific cyber security issues as well as liquidity concerns emanating from the massive cross-holding and web of relationships between various entities of the crypto sphere have exacerbated the challenges from a stressful macro-environment.