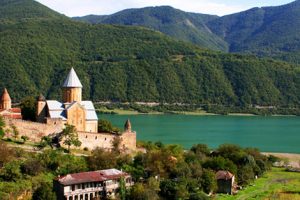 While the blockchain network is becoming considerably more popular in areas from all around the world, the number of governments, financial institutions and private businesses implementing the technology is still quite low, considering the fact that more research needs to be carried out, and that blockchain can only be truly successful through mass adoption.

Regardless of this, recent reports indicate that Georgia is planning to begin using the blockchain technology to deal with most of the region’s real estate documents. With this in mind, the Georgian Minister of Justice has also declared that the country has managed to achieve all of its technical goals in terms of blockchain adoption, and that they are finally ready to launch a platform meant to store all real estate extracts.

In a recent press statement, the Georgian Minister of Justice mentioned that: “Thanks to efforts of Public Registry, Georgia is ready to join this system. We suppose that in 2017, as the first step of insertion of documents, we will store real estate extracts in the system. We will provide detailed information for our citizens. The main thing is that we have attained technical compatibility. As a result, Georgia will be one of the first countries in our regions and western Europe to establish this technology.”

This is particularly great news, as Georgia will become one of the first countries to truly adopt blockchain technology for a certain niche. Thankfully, more efforts in this direction have been announced by some other countries and states. Although most of them are looking for a lower-scale implementation of the system, this still represents a great step for the blockchain technology, thus putting the blockchain on the right path to mass-adoption in areas from all around the world.

The benefits of the blockchain network are well-known in the digital currency communities, considering the fact that this technology is lightning quick, cheap, cannot be interfered with by third parties and also works as advertised at all times.

Based on everything that has been outlined so far, what do you personally think about Georgia’s plan to attempt making a broader use of blockchain technology through its governmental institutions by putting it at a broad use for real estate document managing? Let us know your thoughts in the comment section below.