“Jaime Dimon is Worth More to Bitcoin” Says Jack Dorsey 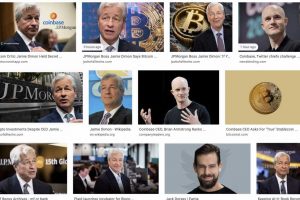 “I personally think that bitcoin is worthless,” Dimon said during an Institute of International Finance event on Monday.

Jack Dorsey, the CEO of Twitter and Square, retorted that he thinks “Jaime [sic] Dimon is worth more to bitcoin.”

It’s not clear what he means by this. One interpretation is that Jamie Dimon is too old to understand much about bitcoin or its worth. The new CEO of JP Morgan may be a young banker and so might understand more. Or he is suggesting that the opinion of Dimon is worthless.

“I wouldn’t put this high on the category of important things in the world, but I’m not going to talk about bitcoin anymore,” Dimon said in October 2017 just before bitcoin took off that year.

That’s perhaps to avoid saying things like: “I’ll just challenge the group to one other thing: how do you know it ends at 21 million? You all read the algorithms? You guys all believe that? I don’t know, I’ve always been a skeptic of stuff like that.”

Skepticism is good and very healthy, which is why in this space we have the mantra of trust but verify. One person that did verify is Brian Armstrong, the CEO of Coinbase. In reply to the above, he said:

“Yes, I read it. And then I wrote it (coding up our own Bitcoin node) to make sure I understood it.”

While in 2017 Dimon said he’ll fire any employee that trades bitcoin – if he wasn’t ‘fired’ by them first presumably – now he makes a distinction between his own opinion and JP Morgan services:

“Our clients are adults. They disagree. That’s what makes markets. So, if they want to have access to buy yourself bitcoin, we can’t custody it but we can give them legitimate, as clean as possible, access.”

Dimon has previously said the government is just gone ban bitcoin, so he and his shareholders don’t have to worry about it. However, after Jay Powell said he won’t bank blockade cryptos China style, he has changed the tune a bit.

“Regulators are going to regulate the hell out of it,” he said, so confirming in some ways that a lot of hostility from US regulators is maybe coming from these bankers who pay them “speaking fees.”

The problem is however that is leading to a situation whereby a lot of crypto entities include the United States alongside North Korea and Iran in their list of banned jurisdictions.

What he calls regulations therefore, in as far as they are unreasonable, can well be seen as the Great Firewall of the United States where cryptos are concerned.

That’s because young bankers, some of whom in his age might run even more successful digital crypto banks, do not like the rent seeking privileges of current banks or their economic blackmail in demanding bailouts for Dimon’s yachts.

You see, we can read the code and some of us can even write it and what they are writing is the elimination, or at least the great minimization, of trust.

Well, we had to trust. Some of us don’t quite have to anymore because we’ve read the code. And although it can have bugs for newer projects, nothing is perfect, we have generally figured out how to generally make it safe in a way that doesn’t require trust on corruptible regulators or centralized manipulatable databases.

And so by the same magic and by the same tricks of Dimon, and by some new magic, the public is now able to turn one eth into ten tokens or things while still having self custody of that eth through smart contract code. They are able to lend and borrow without any trust requirement whatever and without any rent seeking bank or intermediary in a way they can be sure no one stole their interest rate or Libor-ed it.

And those are just two examples of what may be more true, that it is JP Morgan which might become worthless except for their final privilege of outright printing from nothing while lending.

If we add to that the ability to go public through an utterly transparent and constant disclosure public blockchain, instead of Diksonian DTC and too big to bail clearing houses, then it is no wonder his customers may well consider that it is Blockbuster’s CEO speaking and Dorsey suggests his opinion is worthless.

The only thing you can do is adapt to change, but for someone like JP Morgan that might mean adapting to its own comparative irrelevance. Yet would it really be so bad if they were cut to size, if a lot of their business became public platforms, if the uncompetitive banking or finance market became the pinnacle of hot innovation, if in the process we bring capitalism to all and take away some of the privileges which have been abused.

So worth or worthless, you can compete Dimon. We know young bankers will and in the process should build a far more equitable financial market.