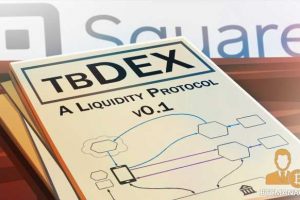 The project released its white paper on November 19, where it details the design principles and long-term vision for the Bitcoin-based DEX.

According to Twitter CEO Jack Dorsey, tbDEX is “a decentralized exchange for Bitcoin” that aims to make the process of trading the premier cryptocurrency for fiat currencies, and other real-world commodities a lot easier and trustless.

Per the white paper, tbDEX “facilitates decentralized networks of exchange between assets by providing a framework for establishing social trust, utilizing decentralized identity (DID) and verifiable credentials (VCs) to establish the provenance of identity in the real world.”

In addition to the aforementioned, tbDEX aims to bridge the gap between the fiat and crypto financial systems without the involvement of any centralized intermediary and trust brokers. The paper posits that stablecoins (digital currencies pegged to fiat currencies) could serve as substitutes for fiat currency.

Moreover, tbDEX aims to differentiate itself from other DEXes in existence by putting the focus on trust and digitized identity. The white paper reads in part:

“The tbDEX protocol approaches trust differently than other decentralized exchange protocols in the sense that it does not utilize a trustless model, such as atomic swaps. At first blush, this is not optimal, especially when considering the end goal of providing access to a trustless asset like bitcoin.”

“However, the reality is that no interface with the fiat monetary system can be trustless; the endpoints on fiat rails will always be subject to regulation, and there will exist the potential for bad behavior on the part of counterparties. This means that any exchange of value must be fundamentally based on other means of governing trust — particularly reputation.”

The team at tbDEX has stated that it is open to receiving feedback on its white paper from the wider community interested in the project.

Notably, the current draft of the white paper is not final and, as such, is only meant to provide a conceptual understanding of the high-level design of the protocol.