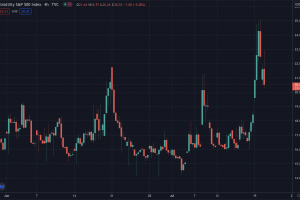 “I’ve gone long the VIX (via $UVXY) to prepare for the macro fireworks.” So said Barry Silbert on June 14th, with some fireworks now on display as VIX (pictured above on 4h candles) spikes to its highest level since May.

That’s still far below the $85 on the 23rd of March 2020, the first day of trading after Italy shocked the world by locking down Milan.

Even that is below the $96 reached on the 27th of October 2008 when Lehman Brothers announced bankruptcy.

Yet markets are a bit on edge, more in China than in USA, with investors across the world closely watching the movements of the eagle and the dragon.

Hours before America and UK was to accuse the Chinese government of hacking Microsoft, news of an iPhone spyware Pegasus, by an Israeli company, breaks.

Apple shares fell, with some reminded of Snowden’s leak in 2013 just days before Obama and Xi was to meet on cyber theft after America was shocked to discovered that a unit of the Chinese military had hacked SolarWorld, the now bankrupt then leader of solar manufacturing in United States and the world.

China’s response then and now remains the same: we’re just learning of all these things you’re doing, and you’re accusing us. US maintains they don’t hack to steal trade secrets from companies to give them to their own companies.

Some say that’s because China doesn’t have any trade secrets as they’ve copied everything, so US can’t respond in kind.

Neither can it quite respond in kind to China’s latest move in signaling the end of the $2.7 trillion US stock listing juggernaut because US companies don’t quite list in China.

They do however manufacture there, and a lot of those manufactured goods make their way to America with China’s trade surplus hitting a record $80 billion a month in 2020, or about half a trillion a year.

According to this data, the China opening up did not quite begin in the 70s, but in 2006 and then took off properly in 2010 at a time when American and European investors developed a groupthink of send everything to China.

They were backed by the ruling elite at the time in UK and US who told the public US and UK was to become a knowledge/service economy with manufacturing allowed and even encouraged to exodus en mass, except in Germany where the board represented employees halted any such attempt.

Closing that massive trade deficit is crucial if America and Europe is going to see any growth with the previous arrangement of ‘brains in USA and hands in China’ breaking down because not only do they not respect intellectual property rights, but the government itself engages in trade theft according to American intelligence officials.

Hence Biden needs to decide just how the eagle flies and in particular whether those tariffs must be back on the table if there’s to be some proper growth. If not, he needs to explain how exactly he responds in a way that shows up on the data.

Here America has huge room for maneuver because China exports about $500 billion a year to USA, while it imports only $135 billion a year.

That’s a 5x difference which can be utilized to force China to respect intellectual property rights and to halt government backed trade theft.

Once those tariffs are back on the table, then they can say they don’t want to talk or can act all belligerent in Alaska knowing full well the current administration risks being perceived as all talk and no action.

The market in China however is currently full of action with fears corporate bond defaults might get out of hand with China’s Evergrande Real Estate Group being the latest to see a 14% fall in shares earlier today following a 16.2% fall on Monday.

The Hang Seng tech Index also fell another 0.8% today after a 1.8% drop on Monday. While Dow Jones in contrast has jumped 1.6%.

That raises the question of whether turbulences in China would affect the US and Europe economically with the Chinese economy previously sheltered during the Euro crisis in Europe or the banking crisis in USA and UK.

You’d think the same should apply in reverse and EU-USA should even benefit as global investors divest from China to invest in Europe or America if we now get the reverse of 2020.

China grew that year significantly after it stopped publishing pandemic data and reopened everything, with US and Europe contracting.

Now the latter are opening up which should boost the economy, while China faces worried investors that are accounting for Party political risks as well as a growing number of corporate bond defaults following huge debt expansion in the past decade in particular.

Evergrande for example might have to sell assets to pay off its debt. That can have a knock on effect in depressing property prices that then make banks less tolerant to mortgage arrears in a spiral of sorts.

Whether that will also apply to China, though with bonds due to overbuilding, remains to be seen, but all of this is adding to volatility.

Something that also applies to bitcoin which has dropped just below $30,000 and currently seems to be trying to overtake it again.

That could in part be due to crypto specific factors, but earlier today it reflected the red in China/Asia and now seems to be reflecting the green in USA.

Making it an interesting question regarding how bitcoin would respond if these bond defaults turn into a full blown financial crisis in China where they may have over expanded with America-Europe having the opposite problem of a housing shortage.

You’d think as a digital commodity outside of the banking system, bitcoin would rally in such a situation after some volatility, but what it will do remains to be seen.