Home » Blockchain » A Quick Look at ZKSwap v3.0 Testnet: How Does It Score?

A Quick Look at ZKSwap v3.0 Testnet: How Does It Score? 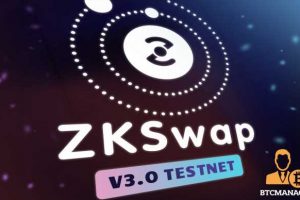 From December 1st, ZKSwap v3.0 launched open access to its testnet. We had a play around with the all-new-look platform, dug a little deeper to understand what new features were included, and looked at how this application will fit into the larger DeFi industry.

ZKSwap is a Layer 2 AMM DEX employing ZK-rollups technology and is currently rewarding users for product testing and trialing the newest upgrade before it launches on mainnet.

It is clear that the biggest change coming to ZKSwap v3.0 is NFT support. The team appears to be intending to become a benchmark to support Opensea on Layer 2 by allowing users to create, mint, buy, and sell NFTs. This will be an important step moving forward as gas prices are inhibiting the growth of the Layer 1 NFT marketplace and raising the barrier to entry for new users. In addition to this support, the new ZKSwap v3.0 will feature something called ‘NFT Transaction Mining’, and ‘NFT Liquidity Mining’, which will enable users to retrieve the locked liquidity of their NFT assets and gain a percentage of transaction fees paid by other users.

NFT support is also found on the updated block explorer which has been given a makeover and functionality upgrade. Now, the explorer will include all transaction information for deposits, withdrawals, and transfers of tokens and the newly-supported NFTs.

Scratching beneath the surface is an important upgrade that will put ZKSwap v3.0 on par with Uniswap v3.0. The AMM formula has been altered to be more flexible and serve more different types of users. When trading with stablecoins, ZKSwap v3.0 resembles the original Curve V1.0 model, but when trading between non-stablecoins, ZKSwap v3.0 will allow for adjustable-price ranges. This means users will be able to choose at which price range to lock in LPs, and in turn, avoid excess slippage for trades that drain liquidity from those ranges. Building from the Uniswap v3.0 model, ZKSwap v3.0 does this by using ERC721 LP tokens and an ‘internal oracle re-pegging mechanism.

How Does It Score?

Building from many ideas and technologies already available and in use, ZKSwap v3.0 presents something entirely new and innovative. Particularly, the new AMM formula solves a pain point for users of Uniswap v3.0 who have suffered losses due to slippage. Additionally, NFT support for Layer 2 is set to be an increasingly important part of DeFi innovation moving forwards as it seeps more and more into the mainstream.

Despite minor interface bugs on the testnet servers, overall usage is quite smooth, and the new changes are easy to see and understand. That being said, the application is still on testnet, and functionality and user experience may change before it goes live on mainnet.

We had hoped v3.0 would support more Layer 1’s, but it appears the team is committing to just working with Ethereum, BSC, OKChain, and HECO at the moment. Also, we had hoped for interoperability between different Layer 2’s, but currently, ZKSwap Layer 2 does not offer an NFT bridge to other protocols.

The product itself is great, and the fact the team is still committed to upgrading and putting out quality products gives a degree of confidence to the project itself. Also, a following of major DeFi tech trends and pre-empting the new phase of NFT innovation should put ZKSwap on the map as ZK-rollups technology becomes more and more utilized. Now with the marketing of ZKSwap v3.0 ramping up, we will see how the market reacts and whether this becomes the next big thing in the DeFi space.

Pioneering the DeFi industry in the utilization of ZK-rollups for a Layer 2 AMM DEX, ZKSwap offers users real-time 0 gas-fee private transactions. Transactions made on ZKSwap utilize the strong consensus security of the underlying Layer 1 blockchain whilst maintaining the privacy of zero-knowledge proof and requiring no gas fees. This solution is ideal for users or institutions looking to perform high-volume trades across a wide range of assets.

After the initial launch and later updated v2.0, ZKSwap has proven to have genuine staying-power and be a real contender in the field of Layer 2 DEXs. The project team enjoys the advantage of being one of the first in this space to focus on using ZK-rollups in a Layer 2 AMM DEX and now service an active and growing community.