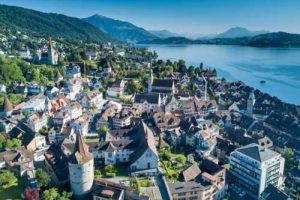 As banks and bitcoin begin to merge, so do their ideologies and the brains behind them. Over the past few years, we have seen many standard banking executives make the transition to the crypto space. We have also seen many banks begin to offer cryptocurrency-related services, and now Diana Biggs is looking to ensure this trend continues.

Biggs is an early bitcoin thought leader. She is now joining the ranks of Valour, a blockchain company in Switzerland that allows people to purchase digital currencies through their local banks. In the past, Biggs worked with her company Proof of Purpose, which sought to aid in humanitarian causes through blockchain technology. She was also the former private banking global head of innovation for HSBC, thereby providing another example of a standard banking exec switching over to crypto.

Valour is based in Zug, a region of Switzerland that has since been affectionately dubbed “Crypto Valley” given how many new crypto and blockchain-based startups call the area home. Crypto Valley takes part of its name from “Silicon Valley,” a region of northern California that also hosts a wide array of large-scale technology and finance companies such as Google, Facebook and PayPal.

Valour has recently launched a product it’s calling Bitcoin Zero, a digital asset ETP that boasts zero fees for its users. It also trades on the NGM stock exchange.

In a previous interview, Biggs said of the crypto space:

I have never seen this much attention to bitcoin and other crypto assets… The time for decentralized technologies has arrived, and their potential is increasingly realized by institutional investors.

Johan Wattenstrom – the founder of Valour – also expressed his excitement over having Biggs join the team, claiming in a recent statement:

Diana is the perfect candidate to lead the company through this next phase of growth and expansion. With a wealth of experience in traditional finance, as well as fintech, and her vision for bringing digital assets into the mainstream, we feel quite lucky to have her on board.

Aside from her work in the blockchain and banking fields, Biggs is also a renowned educator, having previously served as an associate fellow at the University of Oxford’s Said Business School. She also served as a head tutor for the school’s blockchain strategy program between 2018 and 2020. She is presently on the board of the World Economic Forum and serves as a member of the Milken Institute’s Young Leaders Circle.

Banks and blockchain businesses are becoming one and the same in recent months, with so many banks now being given the greenlight to offer crypto custody services to their clients. The most recent example comes in the form of New York bank BNY Mellon, which says it’s offering these services following increased customer demand.