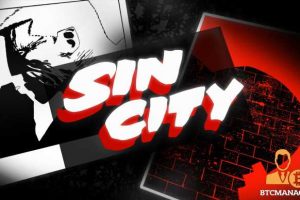 After a long wait, a new NFT launch that will capture the graphic novel Sin City is finally here. The art marks the 30th anniversary of the novel, created by Frank Miller.

The celebration is one of a kind in the comic book art world. By incorporating a partnership with Gala Labs and Concept House, Miller came up with 11 NFTs based on the novel.

Sin City made its debut in the pages of Dark Horse Comics in 1991 with “The Hard Goodbye.” It was a story of ex-con Marv who spends the night with a girl named Goldie who eventually dies, putting Marv on the hunt for her killer. Miller has re-created and reinterpreted the work, including co-directing the 2005 hit film Sin City with Robert Rodriguez.

Miller recalls seeing Marv come to life on set when Mickey Rourke first showed up within the make-up, lurching alongside. Hence, one of the highlights of his NFT collection is a crystalline Marv, which gave Miller yet another way to reinterpret the character. One thousand of these Marvs will most likely be available as NFTs.

In addition to the Marv NFT, one NFT piece will most likely be a private drawing done by Miller for the winner, including an NFT video. The others are items digitally enhanced with motion and sound.

Everyone is Hopping On

The growth of the NFT comes at an exciting time for name-brand comedian e-book creators. Miller and others are attempting to cash in on new mediums.

In this “digital” age, artists have seen the originality of their work dwindle. As a result, NFTs have become very appealing to a large number of artists. It allows them to go digital while making that digital work collectible (similar to an original).

Furthermore, artists earn more money from original art than they do from standard comic book rates. It is due to the low cost of comic books. The average salary for a Comic Book Artist in the United States is $41,643 as of August 2021, which is not very high given the pleasure, joy, and aesthetic coolness they provide to consumers.

Going Deeper Into the Digital World

While Miller is enthusiastic about NFTs, he has no desire to sign a digital comics deal.

Meanwhile, Gala Labs previously launched the animatable and programmable NFT called VOX. It sold out in under 10 minutes. Gala Labs’ is a subsidiary of Gala Games, a premier blockchain gaming company.