Near the start of the Roundabout Theatre Company’s Broadway revival of the musical 1776, a cast made entirely of actors who identify as female, transgender and nonbinary, with multiple representations of race and ethnicity, step into the gold-buckled shoes, literally, of the men who would come to be called the founding fathers. We can only imagine how things might turn out differently, both for the musical and in some alternate real-life universe.

In some ways, not much changes. Members of the Continental Congress still bicker, fight and ever so slowly hash out the details of what will become the Declaration of Independence. Slavery will remain enshrined in both the document and the new nation, and the musical’s rousing Sherman Edwards score is as vibrant and pleasing as ever.

What’s different, of course, are the voices singing those songs and hashing those historical details, and in that, at least, the new 1776, co-directed by Jeffrey L. Page and Diane Paulus, is a delight (especially the songs; that long-winded hashing of Peter Stone’s book is as stubbornly, well, non-musical as ever).

It would be inaccurate to say that Page and Paulus excavate long-buried subtext and hidden meanings from the original work – what becomes the musical’s central conflict, the question of whether or not to maintain the Declaration’s anti-slavery clause, was no less obvious back in 1969. The new production does not take the original work prisoner and force confessions never before uttered, as Daniel Fish did in 2018 with his reimagined Oklahoma!. Nor can it be said that the new 1776 is quite the revolution in approach it intends – forget the non-traditional casting of Hamilton: Shakespeare in the Park has worked this idea for decades.

But at its best, the Roundabout’s production of 1776, opening tonight at the American Airlines Theatre, shakes off any undue weight of expectation, treating the audience to classic musical theater songs sung by voices that have never before been given access. That alone makes up for any shortcomings, notably in the acting of some of the smaller roles. 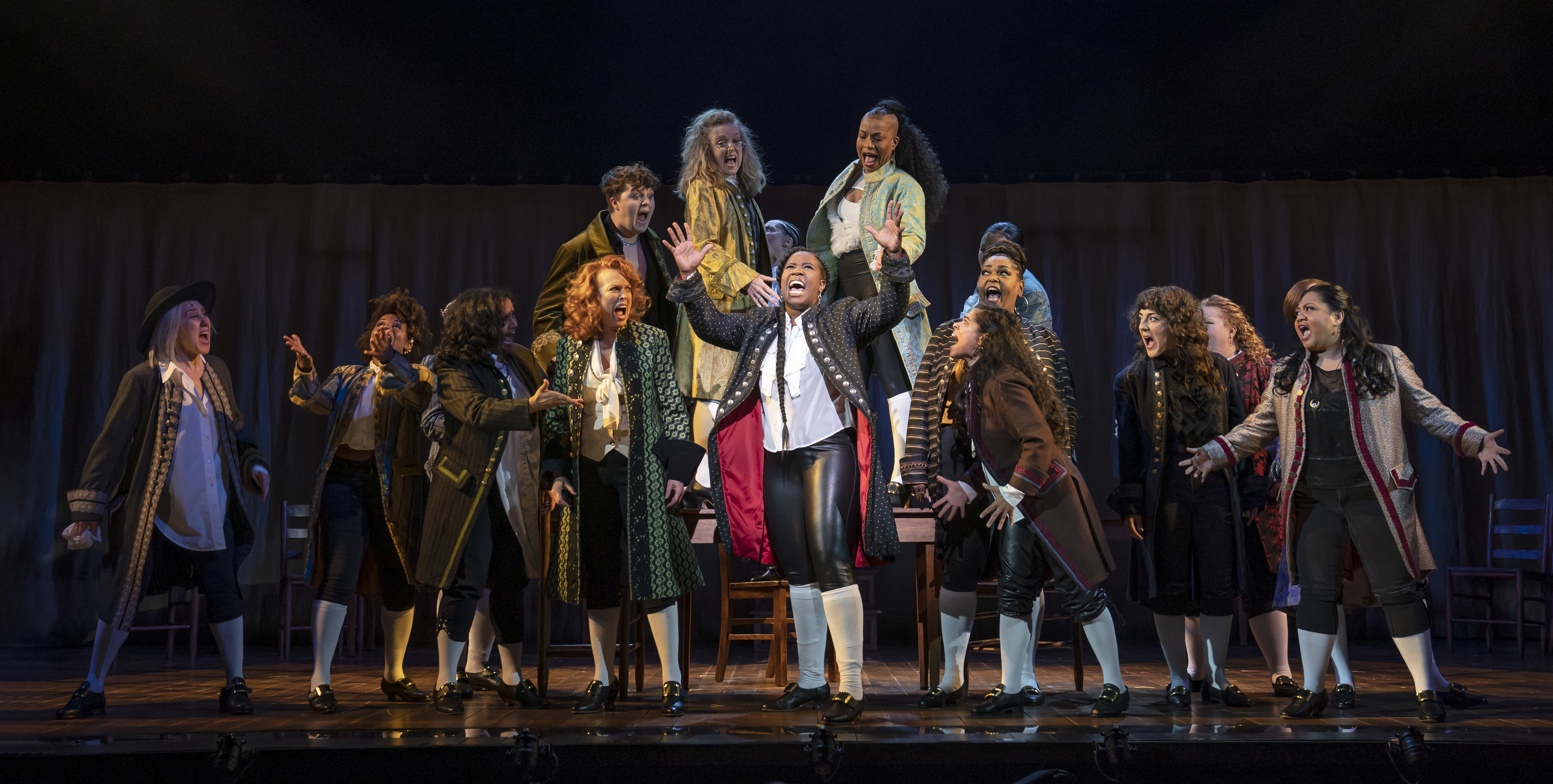 Among the high points: A wicked “Cool, Cool Considerate Men,” that sly take-down of bravery-from-a-distance led by the great Carolee Carmello as the anti-independence John Dickinson, and a blistering “Molasses To Rum,” in which show-stealer Sara Porkalob as South Carolina’s fervent advocate for slavery, Edward Rutledge, fiercely if ever so charmingly calls out the North’s hypocritical stance on the Triangle Trade – rum, molasses and slaves. “Mr. Adams, I give you a toast!,” sneers Rutledge to Massachusetts’ John Adams. “Hail, Boston! Hail, Charleston! Who stinketh the most?”

The “Molasses To Rum” number is one of the best examples of the revival’s all-out approach, with Porkalob’s Rutledge leading an ensemble that transforms the congressional meeting into a slave auction. There are other moments in the production that feel overdone. The mournful ballad “Momma, Look Sharp,” sung by a young soldier who, unlike the cool, cool considerate men making the decisions, has actually seen battle, is performed movingly by Salome B. Smith, who doesn’t need the ensemble of grieving mothers in widow garb backing her up.

The sometimes-it-works, sometimes-not results carry through the entire production. The speed-of-light video projections of historical protest images (suffragists, Civil Rights marchers, gay pride parades) and Black icons (Chuck Berry, Martin Luther King, Barack Obama) that accompanies Adams (Crystal Lucas-Perry), Benjamin Franklin (Patrena Murray) and a visibly pregnant Thomas Jefferson (Elizabeth A. Davis) as they sing the future-looks-bright anthem “The Egg” captures both the promise and the failure of the trio’s optimism (historical facts about their own slave-holding be damned). But Page and Paulus push “He Plays The Violin,” Martha Jefferson’s already-not-so-subtle ode to her husband’s various hidden talents, into Young Frankenstein/”Oh, Sweet Mystery of Life” territory.

Still, even with the heavy breathing, Eryn LeCroy sings “Violin” beautifully, giving the production one of its many musical high points. If the large cast’s acting chops aren’t always as polished as one might hope, the sounds of this musical’s enjoyable score performed by voices as fresh as they are arresting compensates.

As Adams, Lucas-Perry (who has been cast in the upcoming Ain’t No Mo’ and is leaving this show in two weeks) is spirited and energetic and perhaps a bit too likable, given the repeated references to Adams’ disagreeable nature. Murray and Davis turn in fine performances as the wunderkind Jefferson and the witticism-spouting Franklin.

Scott Pask’s set design makes good use of a sort-of crazy quilt period flag backdrop, with David Bengali’s projections counting down the days to independence and providing, when necessary, a contemporary mood. Emilio Sosa’s costume design goes more for a colorful, slightly slapdash costume party style than era-perfect accuracy, a more than suitable approach for a revival that gives history a second chance.