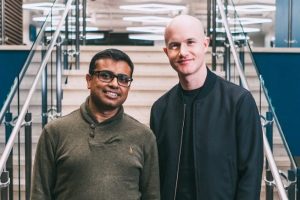 Coinbase, one of the world’s most popular and earliest cryptocurrency exchanges, made its public market debut on Wednesday, riding the wave of mainstream investors’ growing interest in digital currencies.

Coinbase’s highly anticipated direct listing resulted in its shares closing at $328.28 on Wednesday, giving the company a valuation of $85.7 billion — around 10 times what it was last valued at as a private company, according to PitchBook.

That’s up 31.3% from Coinbase’s reference price of $250. But because it opted for a direct listing, no shares traded at that price, instead opening at a price of $381.

CEO and cofounder Brian Armstrong’s stake — 2.75 million Class A shares and 36.9 million Class B shares — is now worth a combined $13 billion.

Two Coinbase executives, Chief Product Officer Surojit Chatterjee and Chief Legal Officer Paul Grewal, both of whom joined the company less than 15 months ago, have stakes worth a combined $957 million.

Chatterjee joined Coinbase in January 2020 after having previously been at Google for 11 years. Grewal joined just last summer, leaving his four-year tenure as a vice president and deputy general counsel at Facebook.