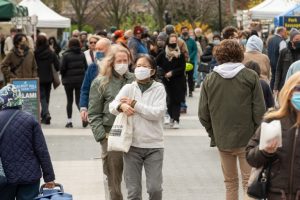 Every time an elected leader proposes a progressive policy that will cost money — expanding health care, for instance, or the wildly popular American Rescue Plan that the Biden White House is championing to combat the economic damage caused by the coronavirus pandemic — the inflation hawks loudly warn that another Great Inflation is on the way.

To anyone below the age of 50, “inflation” sounds like a kind of boogeyman, a campfire ghost story used to warn against government spending.

I’ve never personally encountered hyperinflation in my life — I was born in 1976 — but the word triggers nightmares for those in my parents’ generation. During The Great Inflation, which spanned the years between 1975 and 1982, prices skyrocketed out of control in grocery stores and gas stations around the country, surpassing wage growth by a huge margin and putting everyday necessities out of reach for many.

The fear-mongering of hyperinflation

After nearly four decades without an inflation crisis, is hyperinflation still a danger? Could a $1.9 billion COVID relief bill set off a spate of higher prices around the United States? This week on “Pitchfork Economics,” hosts Nick Hanauer and David Goldstein ask Austan Goolsbee, who served as chair of President Obama’s Council of Economic Advisers and is now a professor of economics at the University of Chicago, whether too much government spending could result in a $10 gallon of milk.

That said, the return of hyperinflation is always within the realm of the possible. Serious economists do warn that too much government spending might increase the output gap, which Goolsbee explained as “the difference between what we think is the potential is for the economy, and what the actual economy is.”

In other words, if the government starts pumping more money into the economy than the economy is actually worth, the actual value of the American dollar begins to lose coherence, throwing the prices of imports and exports out of whack and potentially driving the cost of goods up.

“In a normal stimulus environment, you’re trying to fill the output gap to get us back to where we were in unemployment and output and wages,” Goolsbee explained.

Because the stock market has largely done very well, and because the wealthiest Americans have amassed over a trillion dollars in additional wealth since the beginning of the pandemic, some economists don’t believe the current economic crisis is big enough to warrant spending.

Goolsbee believes it’s a mistake to consider the American Rescue Plan to be a stimulus package in the first place. Unlike Obama’s stimulus package, he explained, the plan that the Biden administration is pushing “isn’t about trying to generate a big multiplier on government spending to raise the GDP, the way normal stimulus is. This is absolutely disaster relief money, in which you’re trying to prevent permanent damage.”

This spending isn’t trying to offset generalized harm to the American economy as a whole. Instead it’s counteracting the specific financial harm absorbed by the American people as they followed public health protocols to stop the spread of coronavirus. The money in the American Rescue Plan will go directly toward keeping small businesses open, keeping Americans housed without ruining their credit ratings, and feeding American families who have lost one or both sources of income.

Say the government gives someone $1,000 to make a rent payment that she otherwise wouldn’t have been able to make, preventing her eviction. That’s a very different kind of government spending than, say, propping up the GDP through high-level stimulus spending on financial institutions. It avoids the negative impact on the economy that a wave of mass evictions would represent, and that rent money is immediately recirculated through the economy in the form of consumer spending.

Goolsbee points to recent economic analysis of the American Rescue Plan, which projects that the output gap would probably grow by about 1% by the end of 2022 — an amount lower than the output gap after both President Trump’s $2 trillion corporate tax cuts and the dot com bust of the George W. Bush Administration.

“We’ve had three times in the last 30 years where we were, for an extended period, running hotter than what [the economy under the American Rescue Plan] would run, without inflation,” Goolsbee said.

But what if, for one time in four decades, the inflation hawks are right and prices do start to rise?

It’s better for our leaders to risk a little bit of inflation that they can then alleviate through higher interest rates and other economic mechanisms, because that price would be nothing compared to what we would all pay if the economy tanks because too many businesses close, too many Americans lose their homes, and consumer spending plummets.

“But that said,” Goolsbee said, “I think the case for inflation is a lot smaller than they say.”