Two new productions opened on Broadway within the last few days, demonstrating that Broadway, at the very least, can accommodate works of remarkable diversity – a diversity in levels of ambition not least. One takes remarkable chances and all but announces the arrival of a singular new theatrical voice. The other, with a team of immensely talented Broadway veterans both on stage and behind the scenes that so relies on overused formula and tired tropes that it can’t even breathe life into some of the most irresistible pop songs of the last half-century.

First, the good news: Ain’t No Mo’, the audacious Broadway debut of writer-performer Jordan E. Cooper powerfully directed by Broadway newcomer Stevie Walker-Webb, is a marvel, compelling even when its considerable reach exceeds its grasp, a mix of sketch comedy, satire, social commentary, drama and tour de force performances that places Ain’t No Mo’ are the forefront of the outlandish, take-no-prisoners style of Black theater pioneered by The Colored Museum and more recently joined by Slave Play and A Strange Loop.

But in so many ways, Ain’t No Mo’ both honors its ancestors and loudly makes a stand for its own unique perspective. Don’t expect perfection in the messy brilliance – what a disappointment that would be. No small part of the thrilling experience of observing Cooper and his excellent cast go for broke is knowing that at any moment he and they could stumble or run out of steam or let their audaciousness outpace their better intentions, and yes, all those things happen once or twice, but who said the arrival of a “new soul” coming to life on stage – in the opening night introduction of producer Lee Daniels – would be a breeze?

The short summary: Ain’t No Mo’ consists of comic sketches (some more overtly comic than others) all premised on the same theme: In order to “solve” its race problem, the United States government, at some point in the not so distant future, offers all Black citizens a one-way ticket to Africa. Mind, the offer is akin to the IRS offering to accept your yearly tax returns.

The first sketch begins the show with what is undoubtedly one of the most exciting opening scenes on Broadway today: The setting is a funeral on the auspicious night of Nov. 4, 2008, the grievers a trope collection of overwrought church ladies and the preacher – a magnificent Marchánt Davis – eulogizing the coffin-enclosed figure of one Brother Righttocomplain. With the election of Barack Obama, the holy man – a holy man, by the way, who certainly breaks some kind of Broadway record for the most and fastest repetitions of the N-word – the Black community’s right to complain, the sketch suggests, is dead and joyfully gone. On that great night of promise, the preacher tells us, there “ain’t no mo’ Emmit Till, ain’t no mo’ Rodney King,” there ‘ain’t no mo’ stop, ain’t no mo’ frisk, ain’t no mo’ getting following around by the tall white lady in the K-Mart on Jones Street.”

For just a moment we almost believe the good reverend’s optimism, but the sermon comes to a crashing halt as an unseen narrator begins reciting the names of the dead and words of reality yet to come: “I can’t breathe,” George Floyd, and far too many others. The prologue of hope ends abruptly, and the exodus to Africa begins.

That’s when we meet Peaches, the check-in agent for African-American Airlines Flight #1619, a flamboyant, effervescent (except when she isn’t) drag queen (played beautifully by Cooper) who has the duty of explaining the government’s new policy as she scans the tickets of the Black population gathered to board the last flight to Africa. “If you stay here,” the no-nonsense Peaches says, “you only got two choices for guaranteed housing, and that’s either a cell or a coffin.” And whatever you do, she warns, don’t look back: In this fantasia, the Biblical pillar of salt is nothing less than a transformation to racial whiteness, and the obliteration of memory – personal pasts, family heritages, cultural contributions, home, gone in a flash.

We’ll see Peaches again – she makes interstitial appearances between the other sketches – and her monologues will take on any number of tones, from comic to tragic to hopeful to, well, other things. But first, there are the other sketches:

But here’s where time hasn’t been kind to Ain’t No Mo‘. What once must have seemed a clear reference to a now-forgotten real-life figure has taken on a new meaning: Could Cooper have intended for this debate on the authenticity of “transracial” people to so obviously mirror similar discussions ongoing today about transsexual people? More to the point, could he have intentionally and so obviously sided with the J.K. Rowling argument – as the play pretty clearly does – about the so-called authenticity of cis over trans? When Rachel-Rachonda is left behind as the show’s sole survivor of the back-to-Africa law, the message is clear: Call yourself whatever you want, but you’ll never be us. Perhaps Cooper meant the analogy – an ugly thought – and perhaps he didn’t, in which case Real Baby Mamas, so very funny up to its final moment, is simply undermined by underthought writing.

A similar running-out-of-steam affects the final sketch, when the wonderful Peaches returns to see the flight, and us, off. Here, Cooper presents his final metaphor, a bejeweled and glowing carry-on bag that contains all of the contributions made by Black people to this country, all the memories and the music and the poetry and the very stuff of a nation. Without it, the Black emigres, Peaches warns, will arrive in their new/old country with nothing but their bodies, their culture left behind.

But Miss Bag, as Peaches calls it, won’t go without a fight, or perhaps its a greedy white America that isn’t going to give up its stolen treasures. In this scene, Cooper delivers a devastating solo performance that stands along with Lucas-Perry’s Black and Davis’ preacher in its power. No spoilers here on how the battle with Miss Bag ends, except to note that it feels abrupt and a bit undercooked.

But no matter really. The end of a play as thought-provoking and electrifying as Ain’t No Mo’ will always feel as if it comes too soon. Besides, we’re left with more than enough to savor, and to ponder, from the cast (which also includes the marvelous Ebony Marshall-Oliver in just about every scene), the fine and funny costumes by Emilio Sosa, the clever cartoon sets of Scott Pask and knock-out sound (Jonathan Deans/Taylor Williams) and lighting (Adam Honoré) designs. Together, they’ve all conjured up Cooper’s vision, and made manifest a bold new theatrical soul. 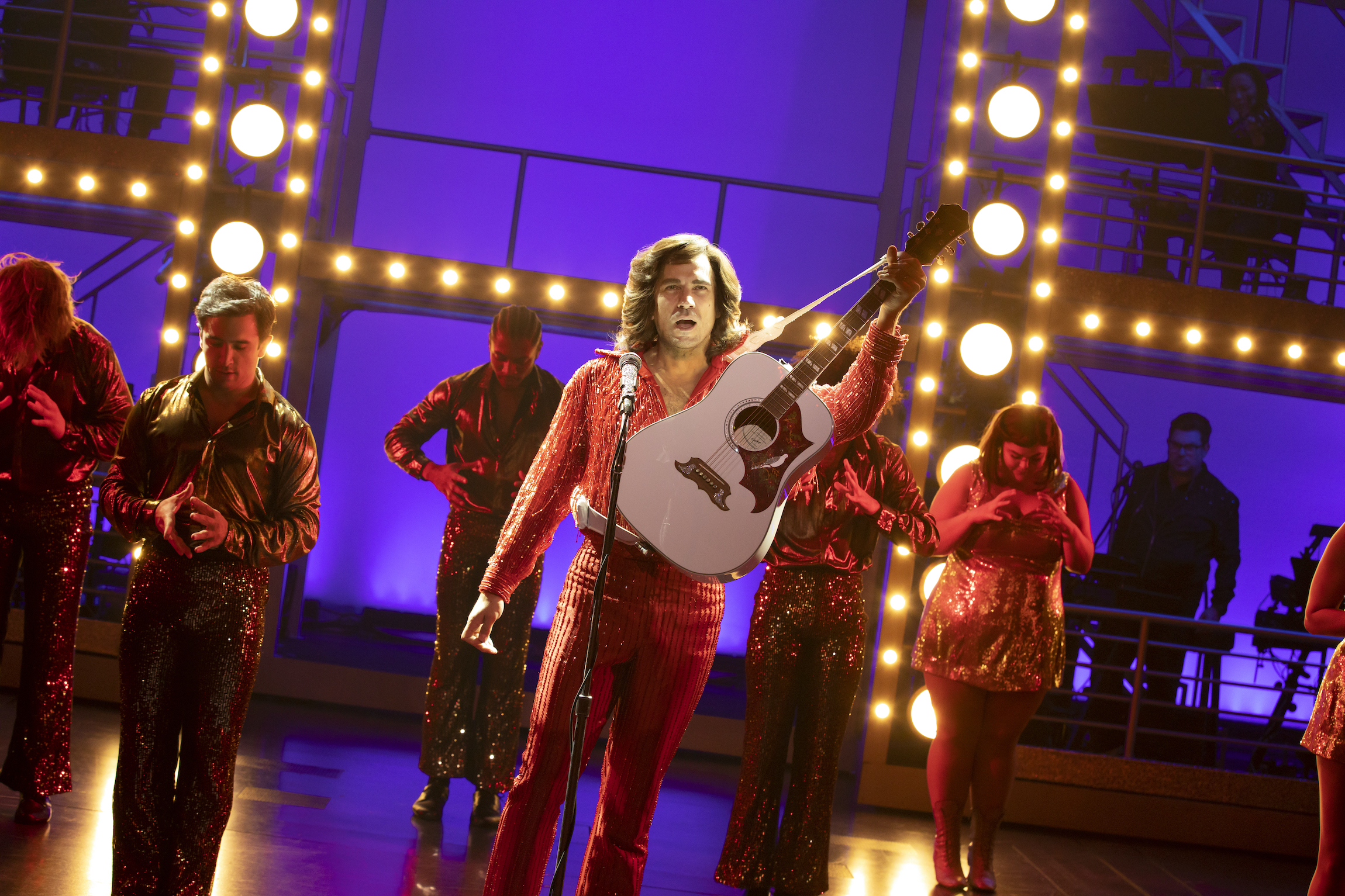 A Beautiful Noise – The Neil Diamond Musical is, alas, neither bold nor, in any meaningful way, new. A by-the-numbers jukebox bio-musical that lacks the necessary galvanizing, dramatically intriguing central force of a Tina Turner (or a forget-everything-else-and-just-watch-the-star performance of Tina‘s Adrienne Warren), Beautiful Noise is a lackluster affair despite its countless sequins.

Cribbing jukebox tropes that lost whatever appeal they might have had many jukes ago, Beautiful Noise tells the frankly uninvolving story the deep-voiced man behind such truly fine pop hits as “I’m a Believer” (made famous by The Monkees – hey, hey, where’s their musical?), “I Am…I Said,” “Cracklin’ Rosie,” “Cherry, Cherry,” “Shilo,” “Solitary Man” and, as the Diamond character concedes, the song that funds his children’s financial future, “Sweet Caroline.” There’s also a fair share of cringy schlock (apologies to those partial to cringy schlock; I am too, just not this particular cringy schlock) – “America,” “You Don’t Bring Me Flowers,” “Song Sung Blue” that might have a place in the hearts of die-hard fans – the ones who know just when to shout back “so good! so good! so good!” during Caroline – but simply remind the rest of us just how dated a lot of this music now sounds.

But here’s the thing about jukebox musicals: affection for whatever particular golden oldies are on the jukebox in question isn’t a make-or-break deal – you didn’t have to love the falsetto of “Sherry” or “Candy Girl” to be blown away by Jersey Boys. What is required, though, is a compelling story, a lead character whose life and career draws us in regardless of what musical chestnut is being roasted. Beautiful Noise book writer Anthony McCarten certainly had more to work with for his Freddie Mercury biopic Bohemian Rhapsody and, according to West End critics, for his upcoming Broadway play The Collaboration about Andy Warhol and Jean-Michel Basquiat). With Noise, he only has Diamond’s commonplace rags-to-riches story – lonely Brooklyn kid with a knack for hits and an unfashionably deep voice makes good, becomes a star, spends too much time on the road and loses touch with the important things in life before realizing what really matters. 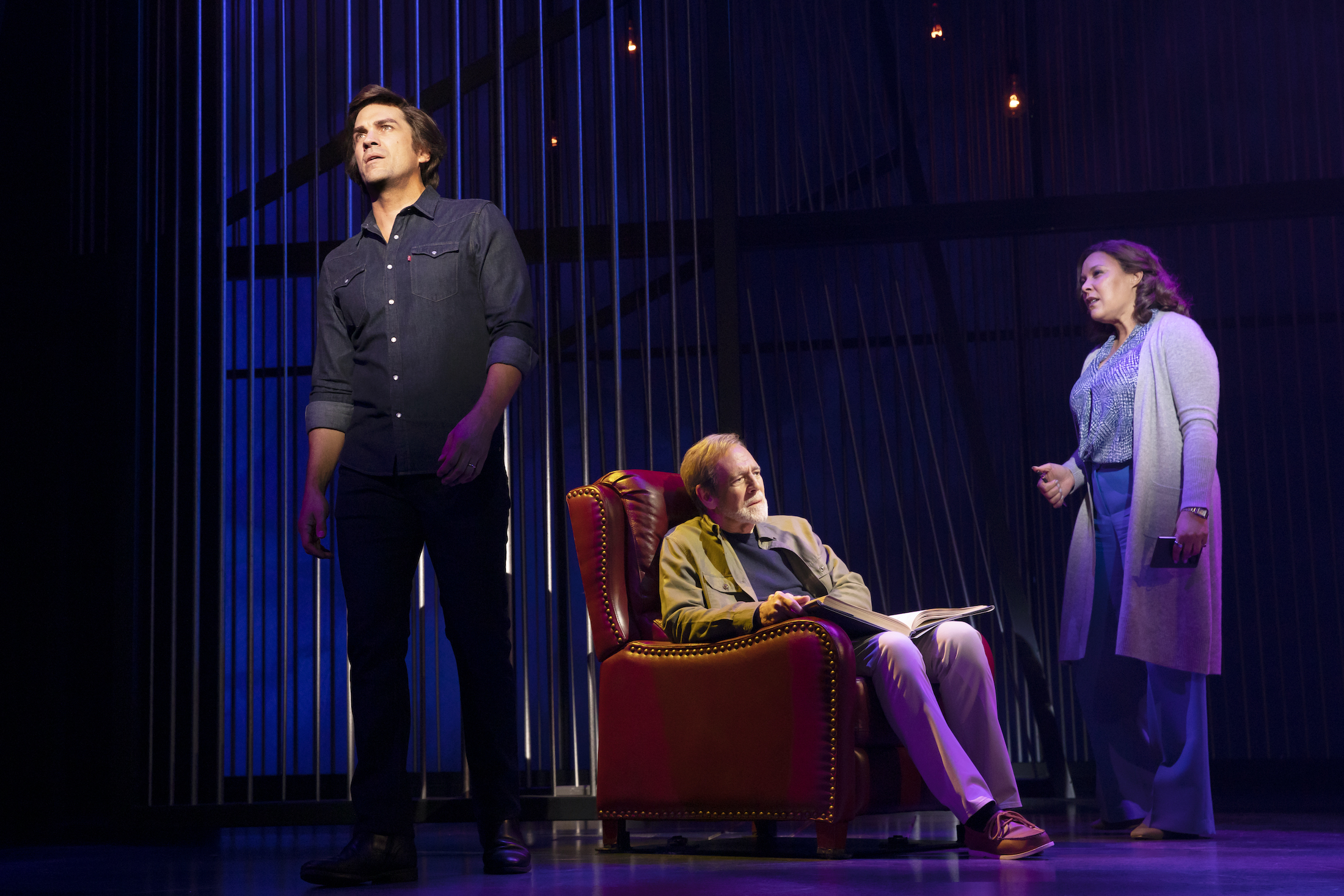 In an apparent attempt to squeeze some drama from the tale, McCarten and director Michael Mayer employ the now-standard jukebox cliche of using two actors to play the star: There’s the aged Neil (played by a miscast and unconvincing Mark Jacoby) and young Neil (Will Swenson, a usually sterling Broadway presence here relying too heavily, with little else for support, on the scrunched-nose singing style meant to suggest unbridled rocking out; that emoting is forced to carry a lot of weight).

And poor Jacoby, another fine actor who here conveys an aging college professor over-enunciating a lecture – there’s nothing of a rock star, even a faded one, in him – and he’s saddled with that most hokey of all premises: He’s reflecting on his life story during a therapy session, his shrink guiding her grudging, curmudgeonly patient through a handy book of his lyrics. A marriage failure? Cue “Love on the Rocks.” His family’s immigration history? “America” will do just fine (though certainly we could have done without the stereotypical Jewish parents and an ensemble of solemn luggage-toting refugees).

Swensen, struggling with a passable though not exactly supple imitation of Diamond’s basement-level baritone, gives an uncharacteristically flat (in more ways than one) performance here, and the actors cast as the women in the rocker’s life – Jessie Fisher and Robyn Hurder – have done much better work in shows that portray women as more than one-dimensional, long-suffering wives. Bri Sudia and Tom Alan Robbins do what they can to jazz up comic-book versions of real life songwriters Ellie Greenwich and Bert Berns, and Linda Powell is fine in the thankless role of the shrink.

The musical numbers – most undertaken with an ensemble of game young dancers going through the motions of era-appropriate Frugs and Hustles in de rigueur denim, spangles and other signifying garb – are all you’d expect, no more or less. The Act 1 closer, “Sweet Caroline,” has Neil rising on a circular platform toward the heights, while ’70s-era Diamond is all helmet-hair and glittery jumpsuits, rocking out as his big band, caged off in flashy, Hollywood Squares-style cubicles behind him, plows through the hits.

A late reveal that explains the aging Diamond’s gloomy mood – well, gloomier than usual anyway – will come as no surprise to anyone who’s followed the great songwriter’s recent years. The musical’s decision to save it up till the end provides one of its more emotional moments – and, one can’t help suspecting, explains the casting of the fine-voiced but otherwise incongruous Jacoby as the elder Diamond – but an earlier disclosure might surely have been preferable. A Beautiful Noise could have used some dramatic stakes from the get-go.

See All The Panels From Deadline’s Awards-Season Event