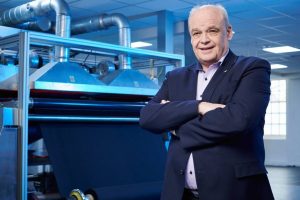 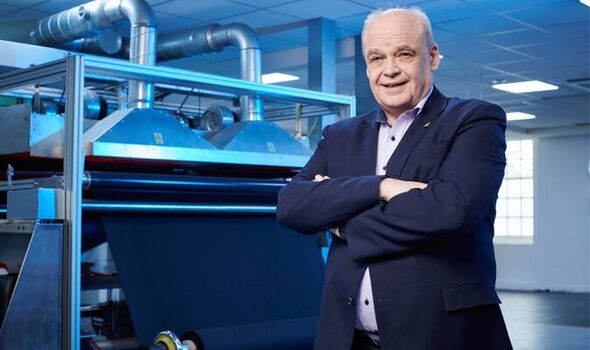 The Cambridge-based disrupter is spearheading a crucial transition with low energy, waterless solutions that tackle the damaging environmental impact the fashion and furnishing sectors are having.

These are the chemicals that enhance sports and work wear by making them waterproof or anti-odour and anti-bacterial.

After eight years development, and backing from investors including global fashion brand H&M, Alchemie is presenting its breakthrough Endeavour and Novara machines to the world with volume manufacturing to be carried out in-house.

Endeavour’s digital dyeing technology, which increases efficiency and output fivefold, cuts energy use by 85 per cent and water by 95 per cent while Novara focuses on the treatment element.

Demonstration showcases featuring the technology have begun, starting in the epicentre of textile manufacturing Taiwan, to be followed by Turkey, India, Bangladesh, and Portugal.

Alchemie’s smart Endeavour innovation centres on high performance jetting technology, thousands of nozzles fire out nano-droplets of the dyes on to materials with the capability to create patterns as well as block colours. Infra-red light, potentially using a green energy source such as solar, then physically fixes them.

Novara is similarly powered, with applications precisely targeted to wherever needed. That’s normally just one side of a fabric and multiple finishes become an option with Novara with one side, for example enabling waterproofing while the other receives an anti-odour treatment.

The adaptable, efficient processes contrast starkly with conventional practices which rely on high energy rinsing and imprecise mass immersion in chemical baths to get results while generating vast amounts of toxic wastewater.

“With Endeavour there’s no wastewater. We can halve the cost of textile dyeing that in an era of spiralling energy costs is even more relevant. Textile operations could see energy bills rise by £1 million this year.”

The former rocket scientist and ace inventor, who has more than 250 patents to his name, was a leader in inkjet printing technology innovation and shook up the ceramics sector with new ways to colour tiles, before turning his phenomenal skills to saving the earth.

The trigger that led to Alchemie concentrating on dyeing came in 2017 when a Chinese manufacturer highlighted the problems in this particular part of the textile industry.

Big manufacturers will need groups of the machines, which cost £1.5 million each and are similar in size to an old-style printing press. Alchemie’s aim is to produce at least 200 a year by 2024.

US economic sustainability specialist At One Ventures has been another key backer and after £12million investment overall so far, Alchemie plans a further £10 million raise this autumn and to double its 40-strong team.

Polyester’s non-absorbent surface that makes it resistant to dyeing has been one of the toughest problems to crack, but having done that Alchemie will launch a sustainable cotton solution next month.

There is the potential too to work with producers of bio-based inks and, as black is the most common dye colour for textiles, harness the carbon black in used tyres.

The hardest challenge however remains: how to get the textile industry to make the colossal changes needed.

“Billions of pounds of investment are needed and only collaboration between brands and manufacturers with state support will do that,” says Dr Hudd who would like to see more recognition coming from the government of game-changing innovators such as Alchemie.

“The UK is at the forefront of this revolution,” he declares, “with a huge opportunity to play a world-changing role.”