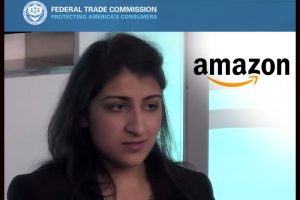 Amazon.com Inc. (AMZN) has filed a request with the Federal Trade Commission for the recusal of new Chairwoman Lina Khan from antitrust investigations of the e-commerce company, on the grounds that she has been critical of the online retail giant in past.

In a motion filed Wednesday with the FTC, Amazon claimed that Khan lacks impartiality in antitrust investigations into Amazon as she has previously criticized Amazon and the way it conducts business. She had even suggested that the company “should be broken up.”

“Given her long track record of detailed pronouncements about Amazon, and her repeated proclamations that Amazon has violated the antitrust laws, a reasonable observer would conclude that she no longer can consider the company’s antitrust defenses with an open mind,” Amazon said in a motion filed Wednesday with the FTC.

The move comes at a time when regulators in the U.S. and Europe are probing Amazon’s business. Europe’s top antitrust watchdog have filed charges against Amazon last fall, while Congress and the FTC are investigating Amazon’s treatment of third-party sellers.

Democratic Senator Elizabeth Warren on Wednesday asked Khan to conduct a “broad and meticulous review” of the MGM deal. “The FTC should disfavor approving deals involving parties with a known pattern of inhibiting competition and harming consumers and workers,” Warren said. “Allowing such firms to continue buying up competitors would only exacerbate these abuses of market power.”

Lina Khan sworn in as chair of the Federal Trade Commission on June 15. At 32, Khan becomes the youngest chair ever sworn into the agency.