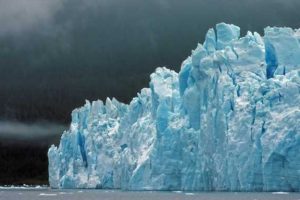 Glaciers, rivers of ice, thousands of years old, that move slowly through mountain ranges, fueled by gravity and their own weight and dynamics, are found on every continent except Australia. Formed by abundant snowfall, accumulating and compressing faster than the snow can melt, glaciers can reach thousands of feet in depth and over a hundred miles in length.

All told, the world’s glaciers hold about 69% of the world’s fresh water, according to the National Snow and Ice Data Center. They also account for — and have created — some of the world’s most awe-inspiring landscapes, even as their annual melt feeds rivers and streams throughout much of the world. (Here are stunning photos of America’s largest attractions.)

To find the largest glaciers and icefields in the U.S., 24/7 Wall St. reviewed data from the Census Bureau’s Tigerweb database.

The United States has glaciers in Washington, Oregon, California, Montana, Wyoming, Colorado, Nevada, and most prominently, Alaska, where nearly 100,000 glaciers cover 5% of the state’s surface area. This one state has more active glaciers than any other region in the world. All 50 of the largest U.S. glaciers and icefields are found in Alaska.

Alaska’s largest glacier is the Bering Glacier, measuring nearly 500 square miles, and, when combined with the Begley icefield, which feeds it, measures 1,900 square miles. Even the Bear Glacier, the smallest of the country’s 50 most extensive glaciers, is an impressive 41.4 square miles in area.

The largest icefield, generally defined as an immense ice mass comprising interconnected glaciers, is the Juneau icefield, which is made up of and feeds dozens of individual glaciers. (For the other extreme, here are the most dangerous volcanoes on the planet.)

Glaciers provide one of the most dramatic measures of climate change. Globally, glaciers are melting at an accelerating pace, losing 31% more ice and snow each year than they did 15 years ago, according to a study of satellite imagery published in April in Nature.

The Alaskan glaciers are among the fastest melting in the world, contributing about 7% of the ice melt fueling sea level rise, while the state’s ice cover is only 1% of the world’s total, according to a 2018 study published in the journal Geophysical Research Letters.

Here are the country’s 50 largest glaciers and icefields