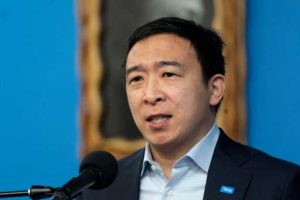 NYC mayoral candidate Andrew Yang released a sweeping “arts revival” proposal today that would include the use of city funds and corporate commitments to purchase “hundreds of thousands” of Broadway and Off Broadway tickets at reduced prices to “bring people back into theatre seats” and stimulate economic growth.

“The administration will negotiate with shows to purchase blocks of hundreds of thousands of tickets at reduced prices to Broadway theatres, off Broadway and other cultural venues,” Yang’s proposal states. “It will commit to buying a portion of tickets with funding from the Mayor’s Fund and will seek commitments from the private sector to match these purchases.”

The corporations – Yang cites a sort-of wish list of J.P. Morgan, Deloitte, PwC and Ernst & Young – would keep a portion of the tickets for themselves “while donating the majority of the other tickets to non-profit organizations around the city, starting with those that support essential workers and first responders.”

Yang was set to unveil the program last Friday but was sidelined by a kidney stone. The former presidential candidate returned to the Democratic primary race campaign trail over the weekend, and currently leads some polls in the bid to succeed outgoing Mayor Bill de Blasio. Other Democrats in the race include former MSNBC host Maya Wiley, City Controller Scott Stringer and Brooklyn Borough President Eric Adams.

Yang’s arts plan, according to the candidate’s website, “would identify businesses within the theatre district across several categories (e.g. restaurants, local attractions) and register them for the campaign.”

Yang says that his “Always New York” campaign echoes a post-9/11 program in which 35,000 Broadway tickets were donated to NYC & Company, the city’s tourism bureau, and passed along to anyone who spent $500 at New York City stores or on other shows.

“With shows having been shuttered for over a year,” Yang writes, “by the time they reopen, the rebuilding process will be longer and more strenuous. That is why a Yang administration will seek to adapt this program for the 21st century.”

The Yang campaign outlines five possible purchasing tiers, with premium front orchestra seats slotted for people spending at least $1,500 with local restaurants and other businesses. Tiers 2-4, with various seating options, would be allocated for those spending $1,000, $750 and $250. Tier 5, called “The Lottery,” would be set aside for people spending $100 or more with local businesses, the participants then placed into a ticket lottery.

In addition, Yang’s proposal encourages the theater industry to offer “personal seat licenses” similar to those often used in sports arenas, in which license buyers purchase the right to season tickets for a certain seat. “Doing so would encourage reliable ticket sales and a portion of the proceeds could go toward charity and revitalizing NYC,” the proposal states.

Other elements of the far-reaching plan include:

Yang’s plan would also implement a tourist-friendly three-month tax reduction for NYC hotels, with the hotels’ savings passed on to consumers as reduce-priced rooms. The candidate also pledges to “offer racial bias and sexual harassment training to support the work theatrical unions are doing in this space and expand the reach of the union.”

The mayoral candidate also pledges to “support efforts to create a pipeline to job opportunities for women and people of color in industry leadership positions, such as producers, general managers, and artistic directors so as to better reflect the demographics of the city. And through spending some city resources on buying block tickets, which will be matched by the private sector, a Yang administration is committed to diversifying audiences and increasing access to those who typically do not partake in the magic of theatre, as well.”