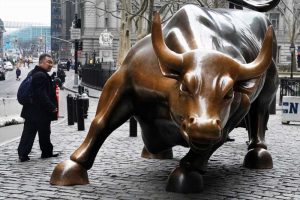 The S&P 500 kicked off the second quarter strongly, breaking through 4,000 for the first time.

Tech stocks were the leaders, but proposed infrastructure plans from the White House and a continued reopening push may bring other stocks to the forefront again.

Some spaces Baruch highlights include rails, aerospace and aviation, and crude oil-sensitive stocks. Still, he's not counting the tech space out quite yet.

"Tech has had these really big runs. Trimming names like Apple, Microsoft, PayPal has proven to be a really good strategy, and then rebuilding those positions on extreme weakness that we've seen here," said Baruch. "You can't ignore the fact that the Nasdaq [100] is breaking out above a trend line going back to Feb. 16 and it's coming through the 50-day moving average right now, so it's going to be moving higher."

John Petrides, portfolio manager at Tocqueville Asset Management, instead has a focus on robotics and artificial intelligence moving forward.

Specifically highlighting the BOTZ robotics and artificial intelligence ETF,  he said, "In a post-Covid world, where this supply chain is going to have to get more efficient, where you're going have less human contact within a supply chain, that favors the robotic side of the coin. Companies are doing more with less, and are forced to do more with less, which is going to favor the artificial intelligence side of the coin. Those two themes have a very long runway to go ahead."

Petrides noted a broad risk for short-term margin pressure, considering events such as the Suez Canal blockage and rising inflation costs. Even so, he believes stimulus and reopenings should continue to drive demand and the stock market higher.