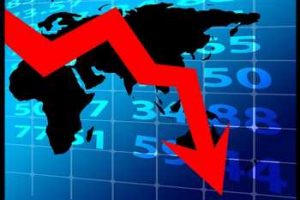 Asian stock markets are trading mostly lower on Friday, following the negative cues overnight from Wall Street on sinking crude oil prices, renewed Covid-19 concerns and rising tensions between China and the U.S. Traders are also worried about the global economy as some central banks around the world are considering tightening monetary policy much sooner than the US Federal Reserve. Asian markets ended mixed on Thursday.

Australian stock market is slightly lower on Friday, extending the losses in the previous session, with the benchmark S&P/ASX 200 staying above the 7,300 level, following the negative cues overnight from Wall Street, as financial and mining stocks are taking a beating. Traders also remain concerned amid the rapid spread of highly contagious coronavirus variants in New South Wales and now in Victoria, with both greater Sydney and Melbourne under lockdowns.

Among major miners, BHP Group is edging down 0.3 percent and Rio Tinto is losing more than 1 percent, while Mineral Resources and OZ Minerals are declining more than 2 percent each. Fortescue Metals is flat.

Rio Tinto reported a drop in production across its Pilbara operations during the second quarter, blaming it on above average rainfall and replacement mine tie-in related shutdowns.

Oil stocks are lower after crude oil prices tumbled overnight. Oil Search and Origin Energy are edging down 0.2 percent each, while Woodside Petroleum is losing more than 1 percent. Beach energy is edging down 0.4 percent and Santos is down almost 1 percent.

Among tech stocks, Xero is gaining almost 1 percent, while WiseTech Global and and Appen are edging up 0.2 percent each. Afterpay is extending its losses and is slumping almost 2 percent

Among the big four banks, National Australia Bank, Commonwealth Bank and Westpac are losing almost 1 percent each, while ANZ Banking is edging down 0.5 percent.

Gold miners are lower. Newcrest Mining is edging down 0.3 percent, while Resolute Mining is down almost 1 percent. Northern Star Resources and Gold Road Resources are declining more than 1 percent each. Evolution Mining is losing more than 5 percent after it saying it will miss its revised full-year production guidance.

In economic news, Australia will see July figures for its consumer inflation expectations; in June, the forecast called for an inflation rate of 4.4 percent.

In the currency market, the Aussie dollar is trading at $0.743 on Friday.

The Japanese stock market is significantly lower on Friday, extending the losses of the previous two sessions, with the benchmark Nikkei 225 just breaking below the 28,000 mark, following the negative cues overnight from Wall Street, as traders are spooked by the spike in the fresh wave of COVID-19 infections. They also await the Bank of Japan’s monetary policy decision due later today.

Japan has already declared a fourth state of emergency for Tokyo until August 22 to combat a recent surge in infections ahead of the Olympic Games opening ceremony in the city in a week. The Tokyo metropolitan government reported 1308 new infections on Thursday, the highest figure since mid-January.

Market heavyweight SoftBank Group is losing almost 1 percent and Uniqlo operator Fast Retailing is down almost 4 percent. Among automakers, Honda is edging up 0.3 percent and Toyota is up 0.5 percent.

In the tech space, Advantest and Screen Holdings are losing almost 3 percent each, while Tokyo Electron is down more than 2 percent. In the banking sector, Mitsubishi UFJ Financial is edging up 0.1 percent, Mizuho Financial is gaining more than 1 percent and Sumitomo Mitsui Financial is adding almost 1 percent.

Among major exporters, Mitsubishi Electric is edging up 0.4 percent and Panasonic is gaining almost 1 percent, while Canon is down 0.5 percent and Sony is losing almost 2 percent.

Among the other major losers, Eisai is losing more than 10 percent, Hitachi Zosen is down almost 5 percent, Alps Alpine is declining almost 4 percent and Seiko Epson down more than 2 percent. TDK, Nikon, Inpex, Toho, Z Holdings, Sekisui House and Bandai Namco Holdings are all losing almost 2 percent each.

In economic news, the Bank of Japan will wrap up its monetary policy meeting on Friday and then announce its decision on interest rates. The BoJ is widely expected to keep its benchmark lending rate unchanged at -0.1 percent. The central bank is also due to release its quarterly outlook report.

In the currency market, the U.S. dollar is trading in the 110 yen-range on Friday.

Elsewhere in Asia, Taiwan, China, Malaysia, Hong Kong and South Korea are all lower by between 0.2 and 0.8 percent each. Indonesia is gaining 0.4 percent. New Zealand and Singapore are relatively flat.

On Wall Street, stocks moved mostly lower during trading on Thursday following the lackluster performance seen in the previous session. The Nasdaq and the S&P 500 closed in negative territory, although the narrower Dow managed to close modestly higher.

Meanwhile, the major European markets all moved to the downside on the day. While the U.K.’s FTSE 100 Index slumped by 1.1 percent, the German DAX Index and the French CAC 40 Index both closed down by 1 percent.

Crude oil prices declined sharply Thursday, sending the most active crude futures contracts to their lowest close in nearly a month amid rising concerns about the outlook for energy demand. West Texas Intermediate Crude oil futures for August ended down by $1.48 or 2 percent at $71.65 a barrel, the lowest settlement since June 18.