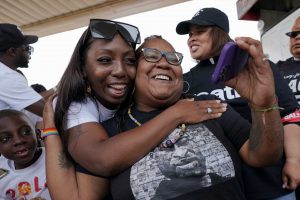 MINNEAPOLIS — When Derek Chauvin was found guilty on all three counts of murder and manslaughter in the death of George Floyd in April, the sizeable crowd at the intersection of 38th and Chicago burst into cheers and tears.

But when Chauvin was sentenced to 22 1/2 years in prison Friday, a much smaller crowd gathered at the memorial known as George Floyd Square had a more muted reaction.

Marcia Howard, a former teacher and organizer who can be found at the square nearly every day, led the crowd in chanting Floyd’s name and “one down, three to go,” in reference to the other officers charged in Floyd’s death. Behind her, a calendar hanging on a gas pump at the Speedway is marked with the date Thomas Lane, J. Kueng and Tou Thao will be arraigned.

Chauvin, 45, who could have received up to 30 years in prison, is expected to serve about 15 years behind bars.

“I was expecting 30 years,” said Holly Marshall, who lives four blocks from the square. “Whenever we get our hopes up, we always get let down and justice never comes for people of color.”

Jennifer Starr Dodd, right, is embraced by Nikki Johnson as her son, 6-year-old Brandon Johnson looks on, after a sentence of 22 1/2 years is announced for former Minneapolis police officer Derek Chauvin in the murder of George Floyd, Friday, June 25, 2021, at George Floyd Square where Floyd was killed, in Minneapolis. (Photo: Julio Cortez, AP)

Some, like Jennifer Starr Dodd, were frustrated Chauvin offered his “condolences” to Floyd’s family but not an apology for his actions.

“I really wish he hadn’t said anything at all,” she said. “That was a slap in the face. He should’ve just stayed quiet and that would’ve been expected and better received.”

“I’m glad that there’s some accountability,” she said. “I’m choosing to celebrate, I’m going to continue to celebrate.”

Analysis: ‘White America can keep kicking Derek Chauvin,’ but what does it mean for systemic change?

The city has been on edge since Floyd was killed more than a year ago during an attempted arrest in front of Cup Foods. Bystander video of Chauvin kneeling on Floyd neck as the handcuffed man repeatedly said he couldn’t breathe sparked weeks of protest in Minneapolis and around the world.

The former Minneapolis police officer was convicted of three counts of murder and manslaughter in April for Floyd’s murder.

Chauvin’s sentencing may provide some closure, but it’s not the end of the legal battle: An appeal in the case is a virtual certainty. The three other fired officers involved in his death won’t stand trial until March. All four men have also been indicted on federal charges of violating Floyd’s civil rights.

Some at the square who were disappointed with the sentence are hoping the federal trial will result in longer prison time for Chauvin.

“At the end of the day, it’s not over,” said Broderick Johnson, 38, who is visiting from Orlando, Florida. “It’s just a first step.”

The intersection near Cup Foods closed to traffic soon after Floyd’s death as activists quickly turned it into a memorial. The square has become an almost sacred space for collective mourning, healing and joy.

Community members, still grieving after the death of Floyd and the recent police killings of Daunte Wright and Winston Smith Jr., have been at odds with city leadership about the site’s future.

Want more coverage? Sign up for This Is America, USA TODAY’s newsletter on race and identity

Work crews removed the concrete barricades, artwork and flowers and reopened the street to traffic this month. Some organizers who have occupied the space since Floyd’s death believe it should remain closed until the city meets its list of 24 demands to achieve justice.

“To see the dismantling of such a sacred space, it breaks my heart,” Starr Dodd said. “As long as there’s injustice, we’ll be here.”