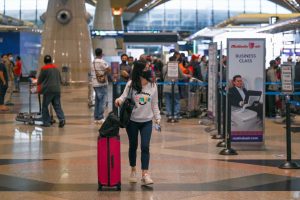 A decision by several countries to impose border restrictions out of concerns around the omicron Covid variant was called "knee-jerk" this week by a group that serves the aviation industry.

Nearly two years into the pandemic, "we don't really seem to have learned very much," said Peter Harbison, chairman emeritus of CAPA – Centre for Aviation, which provides market intelligence for the aviation and travel industry.

Multiple countries including the U.S., Canada, the U.K. and Singapore last week moved to restrict travel from southern Africa after the World Health Organization (WHO) labeled omicron, first discovered in South Africa, a variant of concern.

The newly identified strain has a large number of mutations and worrying characteristics that health experts are concerned about.

Israel and Japan introduced a ban on all foreign visitors.

"There's very little coordination between governments in terms of what we're doing. It's just a sort of knee-jerk every time," he told CNBC's "Squawk Box Asia" Thursday, calling for a "multilateral consensus."

As of Wednesday, 23 countries across the world reported cases of the highly mutated omicron Covid-19 variant.

Stemming the spread of omicron

The WHO earlier warned countries against imposing blanket travel bans, arguing that it will "worsen inequities." The UN health body instead urged an "evidence-based" approach, including more screening and possible quarantines.

However, the White House chief medical advisor Dr. Anthony Fauci on Wednesday defended the U.S. travel restrictions, and described them as a temporary measure intended to buy time for health officials.

The Biden administration on Thursday updated its travel rules to and within the U.S., requiring all in-bound international passengers to test for Covid within 24 hours of departure. It also added mask requirements on planes and public transport.

University of Pennsylvania's Dr. Ezekiel Emanuel told CNBC Friday that the measures were a welcome move in helping stem the spread of the new variant, though he added they could have gone further.

"It's done some very good things," he told "Squawk Box Asia." "Frankly, I wish they had done a little bit more on mandates for airplane travel [and] interstate travel."

"If we can slow [travel] for a few weeks to see which way the omicron variant is going in terms of its virulence, in terms of its transmissibility, that will be effective," he added.

The new travel restrictions from governments across the globe will continue to hurt the already ailing travel industry.

"The industry does have to confront the fact that it's not going to go away very quickly and we are going to get these reactions inevitably every time there is a new strain, which there quite clearly will be," said CAPA's Harbison.

Even before the emergence of the omicron strain, the outlook for the travel industry — and aviation in particular — was bleak.

The International Air Transport Association forecast in October that international air traffic next year will struggle to come close to pre-pandemic levels in 2019.

Asia to be hardest hit

Asia's aviation industry is expected to be worst hit in 2022, reaching just 11% of 2019 levels based on pre-omicron estimates. That compares to 75% in Europe and 65% for Europe-North America routes.

Asia has so far been slow to open up and roll back travel restrictions compared to other parts of the world.

Singapore has been a forerunner in reinstating travel within the region, launching bilateral travel agreements — known as vaccinated travel lanes (VTLs) — with various countries, including several nearby neighbors.

However, Harbison said the country's response to the omicron outbreak will be closely watched.

"If Singapore goes that way and really does start closing down, then I think it sends a very bad signal to the rest of the region," he said.

However, China — Asia's greatest contributor to international tourism — continues to hold the greatest sway on the region's recovery. With little signs of China lifting international border restrictions in the near-term, the impact on the industry could be felt for some time.