Home » Beaches, barbecues and brrrrrr. Did it actually snow on Memorial Day weekend?

Beaches, barbecues and brrrrrr. Did it actually snow on Memorial Day weekend? 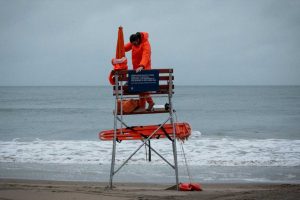 Picnics and pools, beaches and barbecues. Blankets and snow boots?

Memorial Day weekend for many across the Northeast got off to an unusually frosty start – more March-like than May – as temperatures plummeted under bleak and damp skies. And for those at higher elevations, that wet weather translated into something white.

Nearly an inch of snow was reported at Mount Snow, Vermont, on Saturday, and slushy coatings were seen on webcams at at the state’s Stratton Mountain Resort, according to Accuweather. Other cities were pelted by a dreary drizzle or a soaking rain.

The culprit? “A cool, damp northeasterly flow that wrapped around a storm tracking through the Northeast,” AccuWeather Meteorologist Brandon Buckingham said. The air got “wedged” between the Appalachian Mountains and the Atlantic coastline, he said, leading to clouds and moisture.

Many locations from the Ohio Valley to the mid-Atlantic and Northeast were drenched with over an inch of rain Friday and Saturday, and daily rainfall records were broken Friday in places such as Central Park, New York, with 1.22 inches and Clarksburg, West Virginia, with 1.98 inches, Accuweather said.

Honoring our vets: Find your own ways to serve to honor the fallen on Memorial Day: Retired Navy SEAL commander

A lifeguard sets up his equipment as rain falls during Memorial Day weekend in Coney Island in New York on May 30, 2021. (Photo: KENA BETANCUR, AFP via Getty Images)

The temperature turnabout was pronounced: Harrisburg, Reading and Allentown, Pennsylvania, all endured a 41-degree difference in high temperatures from Wednesday to Saturday, Accuweather said. Reading hit a high of 93 on Wednesday, 1 degree shy of matching a 107-year-old record. Then on Saturday the city’s high was 52 degrees; breaking a 25-year-old record.

Pittsburgh hit a high of 51 on Saturday, snapping a record for the lowest high temperature of 54 set in 1897, forecasters said. Philadelphia struggled to reach a high of 54 on Saturday, breaking another record from 1884.

Record low temperatures were broken or tied across portions of the Great Lakes, Northeast and other areas in the northern section of the country, such as in Binghamton, New York, at 38 degrees and Duluth, Minnesota, at 29, Accuweather said.

President Joe Biden traveled to Joint Base Langley-Eustis in Virginia Friday to thank troops ahead of the Memorial Day weekend and acknowledge the unheralded sacrifices that the service members and their families make. (May 28)

The frigid temperatures posed a danger to crops in portions of the Great Lakes, and freeze warnings were posted for parts of Minnesota, Michigan and Wisconsin into Saturday morning, Accuweather said. Frost advisories were issued for many localities in the same area into Sunday morning.

What’s open: What is open and closed on Memorial Day weekend?

But relief is on the way, just in time for many services honoring our nation’s veterans on Monday.

“Memorial Day is likely to flip from cloudy and cool to bright and beautiful for the central Appalachians and even much of the mid-Atlantic coast,” AccuWeather Chief On-Air Meteorologist Bernie Rayno said.