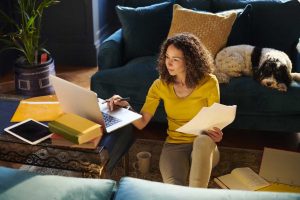 When stimulus payments hit bank accounts earlier this month, many Americans spent at least a portion of that money to pay their bills.

There was a 30% month-over-month increase in the number of payments made to pay household bills from March 17 to March 21, according to the latest research from bill pay service doxo. During that same weeklong time frame, the total amount paid was 37% higher when compared to the same period in February.

"We're getting a strong signal that, generally, the majority of people are being responsible with these payments," says Jim Kreyenhagen, VP of marketing and consumer services at doxo.

Based on some of the early data around the number of checks being sent out, doxo calculates that about 62% of stimulus payments are being spent on bills. A significant portion of that is being used to pay off credit card debt.

During the week of March 17, there was a 29% increase in credit card payments as compared to the same period in February, doxo found. There was a 72% increase in the amount paid.

It's not surprising that Americans opted to use their stimulus checks to pay their bills. "People have been putting debt on credit cards," Kreyenhagen says. "We know that was building up."

In October, for example, 42% of people skipped one or more bills due to the effects of the Covid-19 pandemic and 30% increased their credit card debt, doxo found.

Most likely, it's not new spending that Americans are now paying down. These payments happened immediately, indicating people were paying down existing debt that had built up.

In addition to an increase in credit card payments, doxo found significant increases in the number of payments to utility companies, cable providers and mobile phone carriers, as well as outstanding loans such as mortgages and car loans.

So far, the IRS reports that over 127 million people have received their third stimulus payments and another 30 million who receive benefits from Social Security are expected to receive their checks by April 7.

Check out: Use this calculator to see exactly how much your third coronavirus stimulus check could be worth

Don't miss: What to do if you haven’t received your third stimulus payment yet