Blow for promoter group in Birla Corp AGM as well 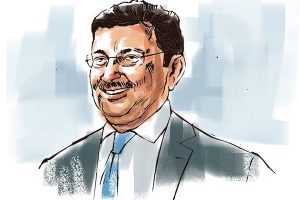 It was a replay of the annual general meetings of the cable companies of the M P Birla group last month even as the Birla side raised “illegalities” in the latest poll results. The APL (Administrators Pendente Lite) committee-backed nominee failed to muster the required votes to make it to the board of Birla Corporation Ltd in a replay of the annual general meetings of the cable companies of the M P Birla group last month even as the Birla side raised “illegalities” in the poll results.

According to the scrutiniser’s report available on the stock exchanges, 70.343 per cent of valid votes were cast against the resolution to nominate Rameshwar Singh Thakur to the Birla Corporation board, proposed by a promoter entity of the group, The Punjab Produce & Trading Co Pvt Ltd, on the “dictates” of two of the three joint APLs to the estate of late Priyamvada Birla.

Had this not happened, according to Khaitan, the votes in favour of Justice Karnik’s appointment would be only 28 per cent and against would be 72 per cent and thereby the resolution would stand defeated by substantial votes against him.

Raising a similar issue, Khaitan said that the votes in favour of appointment of Rameshwar Singh Thakur (Punjab Produce nominee) would be 70 per cent and against would be only 30 per cent and thereby the resolution would pass by overwhelming majority.

In a statement, The Punjab Produce & Trading Co Pvt Ltd (PPTCL) also said that it was exploring legal recourse against blatant and fraudulent actions by the chairman and directors of Birla Corporation, its officers and the scrutiniser, and will also file criminal cases, if so advised.

A statement from the M P Birla group on the voting results also said that fraudulent attempts were made to unlawfully cast votes with the aim of subverting the professional management of Birla Corporation.

“In the process, major crimes such as impersonation and cyber trespassing were committed by people not authorized to vote. But these frauds were detected in time and attempts at unlawful voting neutralised,” the statement said.

The boards of the companies that these imposters sought to represent have decided to take adequate legal action to make sure such crimes do not go unpunished, Mandal added.

The scrutiniser’s report shows that more than 1.06 crore votes cast were considered to be invalid. The M P Birla statement, however, said that votes rejected by the scrutiniser as invalid on technical grounds would not have altered the outcome of polls if counted on either side.

The M P Birla group said that trustees of some societies, who are shareholders of Birla Corporation, tried to cast votes in violation of regulations. “These societies attempted to vote on the basis of unlawful resolutions passed by their trustees — some of them illegally appointed in the first place — whereas regulations require decisions to be taken by the managing committees,” it said.

On the other hand, majority members of the managing committees of these societies had, in compliance with regulations, separately communicated to Birla Corporation their decisions on voting. “Thereafter, these trustees sought to cast votes as members of the managing committees in respect of the same set of shares held by the societies,” the statement from the M P Birla group read.

“In the end, such attempts also came to naught,” Mandal said.