Home » Business » Brad Pitt Says He’s On The “Last Leg” Of His Career & Asking Himself, “How Do I Wanna Design That?”

Brad Pitt Says He’s On The “Last Leg” Of His Career & Asking Himself, “How Do I Wanna Design That?” 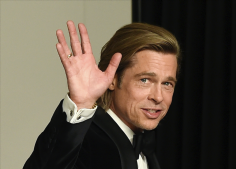 Brad Pitt holds forth on what he calls “this last semester or trimester” of his career in a thoughtful and somewhat elegiac interview for the cover of GQ’s August issue.

“I consider myself on my last leg,” the Academy Award winner says in the piece, “this last semester or trimester. What is this section gonna be? And how do I wanna design that?”

Pitt, 58, has long been thoughtful about the arc of his career — he called his production banner Plan B, after all. His plan B would have made a good plan A for most in the business, with the shingle earning billions at the box office as well as winning three Best Picture Oscars in the past 20 years.

So it means something when Pitt tells GQ that the upcoming Women Talking, “It’s as profound a film as anything made this decade.” The film, directed by Sarah Polley and set for release December 2, is an adaptation of Miriam Toews’ novel about a group of Mennonite women who struggle to reconcile their faith with a series of sexual assaults committed by the men in their isolated religious colony.

As for what Pitt’s plan C might look like, his frequent collaborator Quentin Tarantino tells GQ he sees some precedents.

“He’s one of the last remaining big-screen movie stars,” the director says while comparing Pitt to Paul Newman, Robert Redford and Steve McQueen. “It’s just a different breed of man. And frankly, I don’t think you can describe exactly what that is because it’s like describing starshine. I noticed it when we were doing Inglourious Basterds. When Brad was in the shot, I didn’t feel like I was looking through the viewfinder of the camera. I felt like I was watching a movie. Just his presence in the four walls of the frame created that impression.”