Brexit Britain’s electric car revolution BEGINS! Every home to be equipped with charger 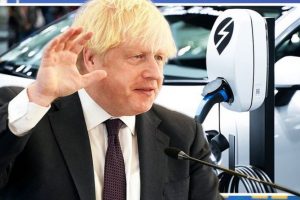 Announcing that the UK could become the biggest economy in Europe Boris Johnson outlined a 10 part plan covering renewable energy sources such as wind and hydrogen as well as policies to accelerate the take up of electric vehicles. Speaking at the Confederation of British Industry annual conference the Prime Minister said: “We will require new homes and buildings to have EV charging points – with another 145,000 charging points to be installed thanks to these regulations.” The rules will also extend to supermarkets and workplaces as well as buildings undergoing major renovation. Mr Johnson explained his growing enthusiasm for electric cars since previously test driving one of the first-ever Tesla cars in the UK when he was a motoring correspondent.

President of the AA, Edmund King welcomed the news saying: “The majority of EV drivers in the future will do most of their charging at home, so it is essential that new homes are equipped to help this transition.

“For those without off-street parking, it is also crucial that we see more charging posts on-street, and in offices and supermarkets.”

Expanding on ambitions for a green industrial revolution Mr Johnson said: “We are investing in new projects to turn wind power into hydrogen and our net zero strategy is expected to trigger about £90 billion of private sector investment, driving the creation of high wage high skilled jobs as part of our mission to unite and level up across the country.”

He pointed to the success of wind power in the UK highlighting that on some days as much as half the UK’s power comes from wind.

The Government has confirmed today it will put nearly £10m into funding a water to hydrogen system at the UK’s largest windfarm near Glasgow.

The project would be the first of its kind in the UK.

As well as wind and hydrogen the Prime Minister emphasised support for nuclear power, questioning why it had been left behind.

Paraphrasing Lenin, Mr Johnson summed up the plans as green power plus the electrification of the whole country.

In a boost to railways he also announced plans to reverse the Beeching cuts and bring some lines back into use.

In an opening speech Director-General of the CBI Tony Danker stressed the group’s support for the Government’s levelling up agenda saying the UK now had: “A shot at redemption, a chance to regenerate with nascent industries – such as biotech, space, and cybersecurity – emerging in all parts of the country.”

Mr Danker also criticised the concentration of many sectors in London and the South East, describing the UK as a “branch line economy”.

In a hit at reliance on the free market he also added: “simply saying the market will fix this is not good enough.”

The Prime Minister however reiterated strong support for a business led approach to tackling issues such as climate change and renewable energy.

DON’T MISS:
Brexit news: Sunak gets blueprint to ensure City leaves EU in the dust [ANALYSIS]
Campaigners warn Boris has ‘no mandate’ to launch E10 [REVEAL]
‘Door is open’ for state pension triple lock to be scrapped for good [SPOTLIGHT]

Citing the success of British TV export Peppa Pig Mr Johnson explained: “No Whitehall civil servant could have conceivably come up with Peppa.”

Today the Government has announced the Innovate UK agency will deliver a new three-year programme of loans to British small businesses worth £150m to help with research and development.

Tony Danker of the CBI also announced the creation of a new CBI Centre for Thriving Regions to try to help coordinate the private sector’s involvement in levelling up.