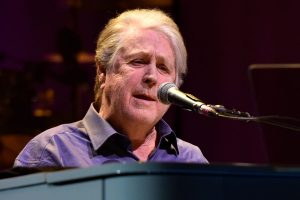 Brian Wilson is a man of very few words.

The Beach Boys icon is the subject of new documentary “Long Promised Road,” which screened virtually for journalists Monday night ahead of its world premiere at the Tribeca Film Festival on June 15.

But the famously interview-shy Wilson, 78, opens up in his own stoic, soft-spoken way throughout the 95-minute film, which centers on a road trip of sorts between the singer and Rolling Stone editor Jason Fine.

Fine, who has interviewed Wilson many times over the years, drives around Los Angeles with Wilson revisiting the musician’s old haunts and listening to the Beach Boys. The two talk about tension within the band, the making of 1966’s “Pet Sounds” and unfinished album “Smile,” as well as the frontman’s mental health struggles.

“We love driving around and talking,” Fine said in a virtual press conference after the screening. “It’s just something we’ve done for a long time. We’ve spent a lot of time doing that together, so this was very natural in that way. And you know that feeling when you’re driving: There’s less pressure. Conversations start, stop, you can listen to music. Things happen sort of naturally when you’re in that rhythm of the road.

“Brian has memories throughout the city, both in his songs and lyrics that he’s written, but also just in his own life,” Fine continued. “So driving around LA with Brian, you’re aware that this is someone who’s often viewed as a reclusive guy, but really, this is his town.”

In two of the film’s most devastating moments, Wilson recalls his controlling relationship with psychologist Eugene Landy. The singer describes how Landy would make Wilson eat spaghetti off the floor and wouldn’t let him see his family as he struggled with his weight and drug and alcohol abuse.

Wilson was also on hand for the press conference over Zoom. Asked why he decided to make the documentary, he simply offered, “I don’t know. I just made up my mind.”

Another journalist wondered why the legendary songwriter frequents Los Angeles’ Beverly Glen Deli. His answer: “The waiters and the waitresses and the cook.”

Looking back at the Beach Boys’ ’60s heyday, Wilson cited Chuck Berry and the Rolling Stones as inspirations, and admitted there was rivalry with the Beatles.

“Me and Mike (Love, the Beach Boys’ saxophonist) were a little bit jealous of the Beatles, because they took over the whole music scene,” Wilson said.

Throughout the doc, which is still seeking distribution, artists including Elton John, Bruce Springsteen and Nick Jonas feted Wilson and his influence on popular music via talking-head interviews.

The Tribeca Film Festival officially kicks off Wednesday with in-person, outdoor screenings of “In the Heights” in neighborhoods around New York, ahead of the movie musical’s theatrical release Friday.