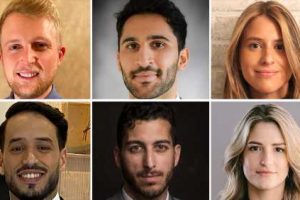 CAA has promoted Chris Burrus, Inder Gill, Sophie Kavanagh, Zakaria Laaboudi,  Arlen Papazian and Kara Petit to Agent following the participation of each in CAA Elevate, the agency’s program for agents and executives in training.

The Nashville-based Burrus will work within CAA’s Music Touring department. He represents many of the world’s leading musicians, including Nate Smith, Tyler Booth, Erin Kinsey and After Midtown, and is on the teams that support Jake Owen, Matt Koziol and Brandon Ratcliff.

Gill will serve on the Media Finance team, led by Roeg Sutherland and Benjamin Kramer, specializing in the representation of independently financed films. He was one of the lead agents helping to sign Anupam Tripathi, who played Ali Abdul in Netflix’s South Korean smash Squid Game, and is based in Los Angeles.

Kavanagh has been promoted to Agent in the Commercial Endorsements department, and will be based in the agency’s New York office. In her new role, she will focus on creating opportunities for the agency’s clients in the world of on-camera, print, personal appearances, voice-over and social media-driven campaigns, both domestically and internationally.

In his new role as an International Sports Talent Agent, the London-based Laaboudi will identify and orchestrate endorsement opportunities for the agency’s international talent clients, including the 2022 Premier League Golden Boot award-winner Son Heung-min, Cristiano Ronaldo, Raphaël Varane and Daniel Ricciardo, among others.

Based in Los Angeles, Papazian will serve as an Agent in the Podcast group, representing many of the most successful podcast properties, creators and production companies, with a focus on creating live touring opportunities.

Also based in L.A. is Petit, who has been tapped as an Agent in the Global Television department. She specializes in identifying new opportunities for Korean and French-speaking artists, and now works on behalf of many of the world’s leading directors, writers, actors and producers, including Hwang Dong-Hyuk, Lee Myung-Woo, Anupam Tripathi, Ryoo Seung-wan, and Tapas Media, among others.

Burrus joined CAA in 2018 upon graduating from the University of North Carolina at Chapel Hill, where he earned degrees in Music for Vocal Performance with Distinction, Entrepreneurship and Creative Writing. He initially served as an assistant to Sabrina Butera, and supported Marc Dennis, Meredith Jones and Emily Van Allsburg in the Music Touring department, before being promoted to Music Touring Coordinator in 2021. He previously held internships at such companies as ole Publishing, Capitol Christian Music Group and Yep Roc Music Group.

Gill started in the mailroom at CAA in 2017, then serving as an assistant to Maren Olson and Sutherland before being promoted into CAA’s Elevate program in April 2021. Prior to CAA, Gill studied History and Political Science at the University of California, Santa Barbara.

Kavanagh graduated from the University of Texas at Austin in 2017, and began her professional career at CAA the following year, serving as an assistant in Commercial Endorsements, prior to being promoted into the CAA Elevate program in June 2021.

Laaboudi joined CAA Sports in 2018, serving as an assistant to Roman Di Somma, prior to being promoted into CAA Elevate in October 2021. He graduated from AMOS with a Master’s degree in Sports Marketing, and began his career in Global Marketing Partnerships at the NBA.

Papazian began his career at CAA in the mailroom in 2019. He then served as an assistant to Josh Lindgren, Head of the agency’s Podcast department, and was promoted to Coordinator in 2021. Before joining CAA, Papazian was an intellectual property litigator at Key IP Law Group. He graduated from Cornell University with a degree in Biological Sciences, and William & Mary Law School with a J.D.

Petit started at CAA in the mailroom in 2018, then serving as an assistant to Michael Gordon before being promoted to Global Television Coordinator in 2021. She graduated from La Haute Ecole de la Province de Liege with a degree in Communication and Public Relations in Entertainment, and, prior to CAA, worked at RTBF in Belgium.