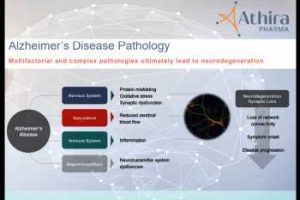 Shares of Athira Pharma Inc. (ATHA) are down nearly 62% from their all-time high of $34.25, recorded last January, and trade around $13. The company has an important catalyst to watch this year.

Athira is a late clinical-stage biopharmaceutical developing small molecules to restore neuronal health and stop neurodegeneration. The lead therapeutic candidate is ATH-1017, being developed for Alzheimer’s and Parkinson’s disease dementia.

ATH-1017 is under two clinical trials dubbed, ACT-AD and LIFT-AD.

The ACT-AD study has completed enrollment with 77 subjects in the United States and Australia. Data readout from this trial, with a primary endpoint of *ERP P300 Latency and secondary endpoints measuring cognition, function, and behavior, is expected in the first half of 2022. (*The event-related brain potential (ERP) P300 component is a sensitive, noninvasive, and practical indicator of cognitive impairment).

The LIFT-AD trial is actively recruiting participants, with topline results targeted by the end of 2022.

The company is also evaluating ATH-1017 in a phase II trial for patients with Parkinson’s disease dementia or dementia with Lewy bodies, dubbed SHAPE. This study is also recruiting participants.

Next in the pipeline is ATH-1020, a novel, small molecule therapeutic for neuropsychiatric indications. This compound has completed preclinical studies, and a phase I trial of ATH-1020 in healthy volunteers is expected to be initiated next month. (Source: ClinicalTrials.gov).

Athira made its debut on the Nasdaq Global Select Market on September 18, 2020, offering its shares at a price of $17 each.