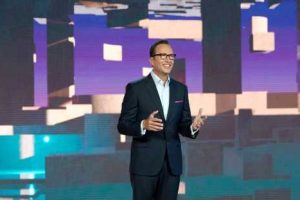 He joins as President, Roku Media, effective in late October, based in New York.

The surprising move is a major statement of intent from Roku.

Collier will oversee advertising and content at the digital streaming company. He will run Roku Media globally, managing its ad platform business as well as content for Roku’s owned and operated channels, including The Roku Channel.

During his time with the linear network, which came largely after the sale of most of 21st Century Fox to The Walt Disney Company, he was responsible for acquiring free streamer Tubi, launching Studio Ramsay Global with celebrity chef Gordon Ramsay, launching Blockchain Creative Labs and acquiring Bento Box Entertainment and MarVista Entertainment.

Roku has been increasingly getting into the original content game. It acquired the assets of short-lived, short-form service Quibi and hired former ITV America Chief Content Officer David Eilenberg as Head of Originals.

It launched its first feature film – Zoey’s Extraordinary Christmas – in December, a follow-up to the canceled NBC series and earlier this week unveiled plans to have an exclusive second window, after Spectrum Originals, for Nick Stoller and Carla Kettner’s Florida dramedy Panhandle.

Roku has also been staffing up over the last 18 months; Deadline revealed last year that it had hired two executives from Quibi – Colin Davis was tapped as Head of Scripted Originals and Brian Tannenbaum as Head of Alternative Originals.

Collier’s hire comes as part of a trio of moves for Roku, which also sees Mustafa Ozgen and Gidon Katz promoted to President, Devices and President, Consumer Experience respectively.

All three report to Anthony Wood, Roku Founder and CEO.

“There is a tremendous opportunity to further accelerate and evolve Roku’s business as the streaming platform built for advertising, and Charlie is the ideal person to help us capitalize on the moment,” said Wood. “He is a proven leader who brings vast experience, a history of evolving businesses, strong creative instincts, talent relationships and a track record of driving revenue and growth. He will play an integral role in helping us achieve even greater success as a next-generation media company.”

FX’s ‘Reservation Dogs’ Picked Up For Season 3 On Hulu