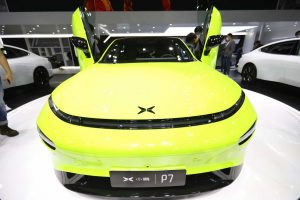 Meanwhile, rival Xpeng Motors saw vehicle deliveries accelerate in May as it managed to weather the same semiconductor shortage.

Global automotive players have also been dealing with a semiconductor shortage which has impacted their business.

"In May, the Company's vehicle delivery was adversely impacted for several days due to the volatility of semiconductor supply and certain logistical adjustments," Nio said in a statement.

"Based on the current production and delivery plan, the Company will be able to accelerate the delivery in June to make up for the delays from May," the statement said, adding that it reiterates its delivery guidance of 21,000 to 22,000 vehicles in the second quarter of the year.

The company said last month it expects second quarter deliveries to be between 15,500 and 16,000 units.

Xpeng said that it delivered a record high 3,797 units of its P7 sports sedan in May. In January, the company began rolling out the next generation of its so-called "advanced driver-assistance system" (ADAS) called XPilot 3.0 to P7 cars. In the March quarter, the carmaker recorded revenue from the software for the first time.

The Chinese electric car maker delivered 1,889 of its G3 SUV in May.

Meanwhile, China had a five-day Labor holiday in May.

"May actually is a very challenging month for the industry, because obviously we mentioned there's been a supply chain constraint on this chip shortage. There's also the holidays, the May holidays imacted the delivery for the first half … of the month," Brian Gu, president of Xpeng Motors, told CNBC in an interview that will air Tuesday.

Still, despite the challenges, May registered a very robust increase for the company, he said.

"And also, I think most exciting to see is that renewed growth of our P7 product," Gu said. "We see actually a much stronger growth of that in our sales mix, so that gives us the confidence of really hitting our quarterly guidance and the numbers for this delivery … for the second half."

The battery market is booming. One company believes it's made a key change to how they're made

Bank of America cuts Tesla price target by over 20%, says more stock sales could be coming

In April, Xpeng Motors launched a new sedan called the P5 which it said would be delivered to customers in the third or fourth quarter of this year.

Xpeng Motors is one of the many rivals to Tesla in China, though it is significantly smaller in terms of delivery numbers. Xpeng's May numbers come just weeks after Tesla faced one of its worst public relations storms in China.