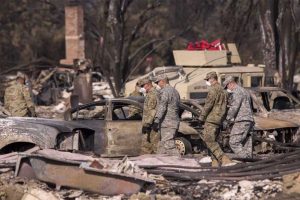 Climate change poses a serious threat to U.S. military operations and will lead to new sources of global political conflict, the Department of Defense wrote in its new climate adaptation plan this week.

Water shortages could become a primary source of friction or conflict between U.S. military overseas and the countries where troops are based, the Department warned. It also expects that political efforts to mitigate food and water shortages will result in more frequent physical and cyber terrorist attacks from unknown third parties.

Extreme weather events made worse by climate change, including droughts, storms and floods, have already cost the Department billions of dollars, according to the plan. An increase in extreme weather events will create more demand for U.S. troops while damaging military bases, degrading mission capabilities and putting service members at risk.

Countries enduring conflict are disproportionately vulnerable to climate change. More than a dozen nations vulnerable to global warming are also mired in conflict, according to an index by the Notre Dame Global Adaptation Initiative. The combination worsens food and economic insecurity and weakens the capacity of governments to provide support, the International Committee of the Red Cross said in a recent report.

"Climate change is an existential threat to our nation's security, and the Department of Defense must act swiftly and boldly to take on this challenge and prepare for damage that cannot be avoided," Defense Secretary Lloyd Austin said in a statement.

"Every day, our forces contend with the grave and growing consequences of climate change, from hurricanes and wildfires that inflict costly harm on U.S. installations and constrain our ability to train and operate, to dangerous heat, drought, and floods that can trigger crises and instability around the world," he said.

The Defense Department was among 20 federal agencies that unveiled climate change adaptation plans this week that reveal the biggest threats global warming poses to their operations and facilities and suggest how they could handle them.

Climate change has made troop safety a major concern. At least 17 troops have died of heat exposure during training at U.S. military bases since 2008, according to the Pentagon.

Training troops to operate in increasingly extreme weather conditions could also provide the U.S. with a distinct advantage over its enemies, as "forces can operate in conditions where others must take shelter or go to ground," according to the plan.

The department said it's committed to using climate intelligence to inform military planners on where and how military installations are at risk. It recently released a climate assessment tool that creates hazard indicators based on data from past extreme water and future changes in sea levels, flooding, drought, heat, land degradation, energy demand and wildfires.

"We must take on these challenges as a team — from every corner of the Pentagon, on each of our installations and bases, across the federal government, and alongside our partners and allies," Austin said.