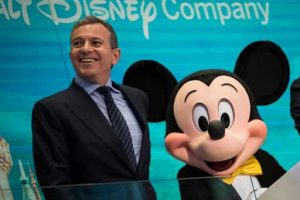 Disney shares busted out of the starting gate, rising 8% in early trading on a wave of optimistic sentiment about Bob Iger’s return engagement as CEO.

The stock pushed near the $100 mark after rising in pre-market trading. It had slumped more than 40% in 2022 to date as financial results have weakened on the watch of ousted CEO Bob Chapek.

Wall Street analysts weighed the company’s new prospects under Iger, who ended a 15-year run as CEO in 2020 before being summoned out of retirement by the company’s board of directors in a Sunday night shocker. The 71-year-old exec will serve at least two years in the top job and identify a successor, the board said. Just five months ago, it had extended Chapek’s contract through 2025, making the Iger move all the more stunning.

Michael Nathanson of MoffettNathanson sounded one of the most positive notes on the Street, upgrading Disney stock to “outperform” (buy) and upping his 12-month price target by $20 to $120. In a note to clients, he said Iger had built Disney into a “global powerhouse,” specifically with his brand-centric tentpole strategy and the acquisitions of Pixar, Marvel and Lucasfilm.

As a leader, Nathanson added, Iger’s “communications skills and his ability to stay focused and honestly optimistic in the face of structural challenges provided a constant ballast in the roughest of media waters. We believe investors will value the transparency and return Disney some of its long-lost magic with a
stronger narrative driving the stock higher again.”

Bank of America’s Jessica Reif Ehrlich was among many to take note of the oddity of the board ejecting Iger’s hand-picked successor, Chapek. Earlier this month, in the wake of Disney’s disappointing quarterly earnings report, Ehrlich took a glass-half-full view, noting Disney’s stable of powerful brands and also its revitalized theme parks. “We now expect Iger to fully re-evaluate several of the recent strategic initiatives and corporate restructurings over the past two years, which could create some near-term uncertainty on direction of the company,” she cautioned in a client note.